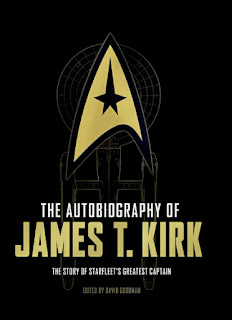 Boldly going where no Star Trek book has gone before, news of Captain James T Kirk's own memoirs from Titan Books...

Chronicling the greatest Starfleet captain's life (2233–2393) in his own words, from his youth spent on Tarsus IV, his time in the Starfleet Academy, through to his meteoric rise through the ranks of Starfleet, and his illustrious career at the helm of the Enterprise, This in-world memoir uncovers Captain Kirk in a way Star Trek fans have never seen before…

With excerpts taken from his personal correspondence and captain’s logs, alongside a unique colour illustrations insert of the captain with his many memorable colleagues and friends, The Autobiography of James T. Kirk is a captivating piece of Star Trek history.

Family Guy head writer and author of Star Trek Federation: The First 150 Years, David A. Goodman has effortlessly captured the singular voice and essence of one of the fleet’s most popular characters in this fun and informative piece of in-world writing. Presented in a gorgeous hardback edition and under license by CBS Consumer Products, The Autobiography of James T. Kirk is a timeless piece for fans of the iconic television show. 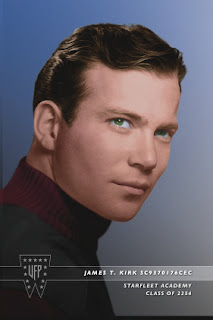 "I hope you'll all read the book with William Shatner's voice and jokes in your head" said David A. Goodman at the 2015 San Diego Comic-Con launch alongside William Shatner, who gave an exclusive reading of The Autobiography of James T. Kirk.

David A. Goodman has spent the last 26 years writing for television. His credits include The Golden Girls, Star Trek: Enterprise, Futurama (where he wrote the Nebula Award-nominated Star Trek homage “Where No Fan Has Gone Before”), and Family Guy where he was head writer for six years. He is the author of Star Trek Federation: The First 150 Years. He lives in Pacific Palisades, CA with his family.