Film - Over the Hedge 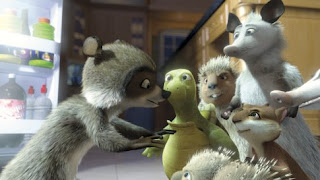 If you thought Guardians of the Galaxy had the first wise-cracking fast-talking racoon, think again as Susan Omand reviews the racoon that sounds like Bruce Willis in Over the Hedge...


It’s early spring and RJ (Bruce Willis) is foraging for snacks in a vending machine, as you do when you’re a travelling raccoon. When the last packet of crisps gets stuck in the machine, he decides to sneak into the cave of a bear named Vincent (Nick Nolte) instead and steal his large store of food, conveniently stacked on a red handcart. The noise of a tube of Spuddies crisps opening wakens Vincent, who has been hibernating and, while they argue, the cart is knocked down the hill from the cave and is destroyed on the road below by a passing truck. Vincent gives RJ one week to get all the food, and the handcart, back to him or be killed. Desperate for help, RJ finds an advertisement for a new housing development and heads off to see what he can find.

Meanwhile, a group of foraging animals wake up from their hibernation. Led by the tentative turtle Verne (Garry Shandling), the animals include the hyperactive squirrel Hammy (Steve Carell), the sassy skunk Stella (Wanda Sykes), the porcupines Penny and Lou (Catherine O’Hara and Eugene Levy), along with their triplet sons, Spike, Bucky and Quillo (Shane Baumel, Sami Kirkpatrick and Madison Davenport), and the possum Ozzie (William Shatner) and his daughter Heather (Avril Lavigne). With no time to enjoy the spring weather, they start to look for food for the next winter, as they were “only nine berries away” from running out this year. They discover that their forest has almost all gone while they were sleeping as it was cut down for the new housing development and all they have left is a tiny patch of trees surrounded by a big hedge, which they mistake for a monster and call it Steve because “that’s a good monster name” (sorry boss). At this point they meet RJ who explains about the hedge and the forest and offers to help them gather food, reckoning that he will steal it from them at the end of the week to pay back his debt to Vincent. However, he quickly warms to the group, convincing them about the "wonders" of human kind Over the Hedge and the ease of stealing and gathering food from them. Only Verne is concerned but the rest are seduced by the cheesy orange wonders of nacho chips and agree to stealing from the humans which goes well until they encounter Home Owner’s Association president, Gladys Sharp (Allison Janney), who calls in an over-zealous exterminator (Thomas Hayden Church) and gets lots of traps in the garden to catch the unwary animals.

Sensing his group is in danger, Verne sets out to return the food they have stolen already to try and get things back to normal, the day before RJ was due to steal the food to give to Vincent, and Verne and RJ argue while the food is destroyed again, this time by a neighbourhood dog. With one day left before Vincent arrives and splits in the ranks, as most of the group side with him against Verne after the destruction of the food, RJ is left with the decision of whether to go against his new “family” and just use them to steal back the food for the bear from Gladys Sharp’s house, leaving them with nothing for themselves. Selfishly, RJ sets about his plan to steal the food and it is nearly perfectly executed until a final need for Spuddies crisps means the foraging animals are caught by the exterminator, while RJ himself escapes with the food to meet Vincent. The bear points out RJ’s caged friends being loaded onto the exterminator’s truck and congratulates RJ on being as bad as he is. Will RJ walk away from his new friends?

Well of course he didn’t, this is a kid’s film with good morals, family values and good humour, so the finale is how he goes back to rescue his friends, get the bear captured and Gladys and the exterminator taken away by police. As a film, it doesn’t have the huge, constant laughs you might expect from the production company that gave us Shrek, although the humour is definitely clever and sometimes laugh out loud funny. It feels quite grown up for a kids’ film which may have knocked its box office appeal somewhat and it’s not better known because it came out around the same time as several others (2006), such as Pixar’s Cars which stole the hype and left it as an also ran. Bruce Willis as RJ is basically John McClane without the swearing and the violence, a wise-cracking loner with a good heart. If you gave him a vest and a gun, instead of a golfbag full of household items as his weapons, RJ is every bit the anti-hero. This is one of the few animation voices that Bruce Willis has done to date but I have to say this film was stolen from under the raccoon’s nose by the sublime, and deliberate, overacting of William Shatner’s possum, whose constant anguished death scenes channel James T Kirk perfectly and are the main reason to watch.

Entertaining and amusing but by no means Bruce Willis' best work.