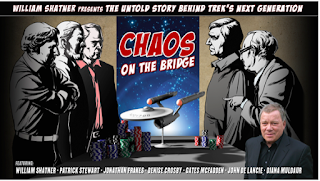 "It's a documentary, Jim, but not as we know it" as Susan Omand engages and watches William Shatner Presents: Chaos on the Bridge...

Everybody who loved Star Trek loved The Next Generation, right? It was a guaranteed hit, right? And nobody but Patrick Stewart could ever be considered for Picard, right? Wrong, wrong and wrong! At least it is according to William Shatner Presents Chaos on the Bridge. This hour long documentary looks at the power struggles and behind the scenes wrangling that went on during the making of what could be thought of as one of the first franchise reboots of a TV sci-fi series.

Featuring interviews with cast, writers and directors of TNG and presented by Captain James T Kirk himself, William Shatner, the programme mainly centres on the Star Trek creator Gene Roddenberry and the effect of his control and ultimate demise on the success of TNG as a series. He wasn’t involved in the inception of the idea, which came about because of a) the first film “getting out of hand” and b) the impending 20th anniversary of the original series. Roddenberry came on board through necessity and at the request of Paramount, after a very contentious battle with the studio, who owned the rights, for a very “handsome share” of any profits and brought with him original writers such as D C Fontana to try and get the fans behind the idea. But the fans were not happy. With no Kirk, Spock or McCoy, they argued that it wasn’t Star Trek as fans being protective of canon are wont to do. So the studio wasn’t happy, the fans weren’t happy, even the money men weren’t happy as the TV networks refused to take it on as a series and left it to syndication, so who was happy? Apparently everyone in the 24th century, as Roddenberry decreed there would be no personal clashes in the series as all conflict in the world had been resolved by then, leaving a hell of a job for the writers as, without interpersonal differences, there is no drama. 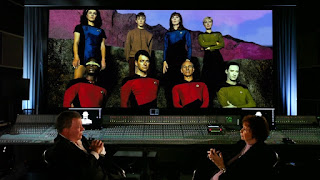 And so the documentary continues to unravel the mess of the first two seasons, with stories and anecdotes of the fights for power as Roddenberry’s health started to fail and the lawyers took over, writers came and went, cast came and went, most notably the characters of Tasha Yar and Doctor Crusher. There seemed to be only three saving graces from the first 2 seasons that actually worked, all of which, ironically, were the invention of Roddenberry – Q, the Borg and the holodeck. It was only a new showrunner in season 3, with the introduction of Miami Vice's Michael Piller, a lessening of involvement from Roddenberry and a shift away from plot driven stories to more character led episodes that eventually proved to be the saviour of the show and the dawn of a new age as the season 3 finale Best of Both Worlds, finally gave the characters some “humanity”.

I am a huge Star Trek fan and I really enjoyed this as a documentary, getting a lot of insight into the making of the show and listening to those voices less often heard. Having William Shatner act as interviewer was a master stroke as it tied everything together well and his interactions with the likes of Jonathan Frakes are very entertaining. As a factual piece, although very centred on Roddenberry, it was well balanced as it didn’t bathe him in a rosy glow but neither did it completely vilify him, with contradicting stories in the interviews which left it up to the viewer as to which angle to believe. I wasn’t keen on the use of the comic book drawings throughout the documentary as I found them to be a distraction, although I understand that they illustrated arguments and served to somewhat “lighten” the subject and maybe make it more accessible to less avid fans. Similarly too for the music, country music which I guess was used to highlight the “wild west” nature of working on the series and the “poker games” of power struggles, but which I found irritating for the sake of labouring a single idea.

If you’re a huge fan, like me, or even if you gave up on TNG before the third series and wonder what people saw in it, you will get a lot from this documentary and it’s definitely worth watching if only to get the story about Patrick Stewart’s wig...