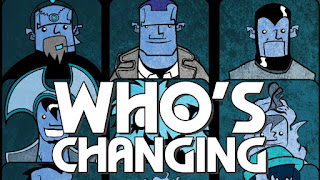 Steve Taylor-Bryant gets all emotional and fanboy reviewing Who's Changing, the fan funded documentary about fans of Doctor Who. First published during the 50th Anniversary...


Though we normally put documentary reviews earlier in the week when Cameron K. McEwan sends you a DVD you jump to attention, grab your jelly babies and scream GERONIMO. We are very selective here at HQ where our hard earned Den Dollars get spent but this fan funded film was a product we threw the whole weight of my wallet behind (no moths were harmed in the throwing of the corporate receipt holder). Producer for Capital City Entertainment, Elisar Cabrera, is a friend of /G-f so, when the project was first launched, we were honoured he took our money. Cameron K. McEwan not only produced, directed and edited the film he also continued to run BlogtorWho, make copious appearances on tv and radio, got on stage playing his guitar and never once had one of his wonderful hairs from that beautiful head of hair get out of place (sorry, jealous moment).

Seeing such luminaries on my television screen all at once made this really hard to review. It was after the Tom Baker (fourth) watch through that I was even capable of making a note and a whole Colin (Really? Yes, it's my review) before I felt safe writing impartially. I warn you now your fanboy/girl bits will tingle with anticipation much more than at your school prom.

From its humble beginnings in a Battersea church hall, through the wilderness years, to Matt Smith's reign the one thing that bleeds through is unbridled passion. Whether it be a cosplayer or a star of Doctor Who, and there are enough here to fill a TARDIS, everyone has a say, an opinion brought to life by McEwan's direction. Honestly he must get home, have his wonderful head of hair hit the pillow and thank Rassilon for his solid gold life (seriously, I am working on the jealousy I promise).

The Cosplay section of the film was of particular interest, as it's a subject I know nothing about and it evolved as a discussion into the sexual politics of role playing which was incredibly informative. Comic and book writers aplenty adorned the screen, each with their own passionate take on the show and fandom and you can't help but build an Amazon wishlist of these guys' work (come on, I wasn't the only one!) whilst the interviews with Gary Russell and Jane Espenson are highlights as the emotional story arcs get in on the debate. Both raised valid points and certainly a must see for those that delve deeper into the writing structures on Doctor Who.

But my favourite segments were those that involved Leela and Ace. Along with Nicola Bryant as Peri, Louise Jameson and Sophie Aldred were my youthful infatuations. Whilst my classmates bedrooms were covered with Sam Fox posters I had eyes only for the girls of Who, MY girls. That was my growing up right there. Still looking fan-tabulous today they bring a really important take to the film having spent so long not only in the show but attending conventions and the like.

Favourites amongst /G-f staff are Simon Fisher-Baker (Dorium), Dan Starkey (Strax) and the gorgeous Neve Campbell (Madame Vastra) they add a heavywieght presence with the younger viewers due to how current they actually are as stars in the 50 year old show.

This is a must own. A fan film yes, but better than any of the documentaries we got treated to during the 50th anniversary. I am off to stick pins in my Cameron K. McEwan doll and hope his hair falls out, talented git (just kidding Cam. You are talented but I'm too lazy to make a doll).