Continuing with our celebration week of The X-Files, Steve Taylor-Bryant takes a look at two episodes from Season 1 that he really loves...


After my Top 5 earlier, it is time to take a look at the standout episode, or in this case two episodes, of The X-Files debut season. Both episodes involve a creepy serial killer in the form of Eugene Victor Tooms with the killer’s first appearance also coinciding with the 'Monster of the Week' type episodes that were so well received despite not having anything to do with the shows overall government conspiracy story arc.

Squeeze was very early in Season 1 and Scully has been asked by an old friend from the F.B.I, Agent Tom Colton (Donal Logue - Gotham), for some assistance in profiling a serial killer that he just doesn’t understand. The murders are not linked by race, religion, sex, or employment, and all happen in locked rooms with no signs of entry. Scully agrees and whilst Colton is reluctant he allows her to invite Mulder. Mulder's interest is immediately piqued as the killer rips out his victims livers with his bare hands, which reminds him of murders that occur every thirty years dating right the way back to 1903. At the scene of the third murder Mulder discovers an elongated fingerprint on a ventilation grate that matches the fingerprints taken in the 1933 and 1963 scenes and believes it is the same perpetrator, much to the amusement of Colton and his colleagues. 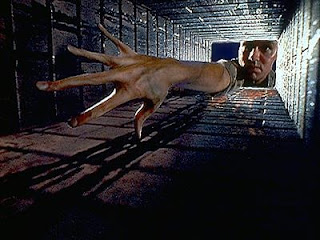 Believing that the murderer may return to the scenes he has previously visited, Scully sets up a sting at the office block where she and Mulder find Eugene Victor Tooms (Doug Hutchison - The Green Mile) coming out of the buildings ventilation system. Colton and his team aren’t convinced that Tooms is really the culprit and, despite Mulder's insistence, they release him convinced they had just arrested a man doing his job. Mulder and Scully visit with the Sherriff that investigated the 1963 murders and take his notes and photos that appear to prove that Eugene Tooms is in fact the murderer. At his old address they discover what appears to be a nest for hibernation and Mulder believes that Tooms takes the livers to sustain himself reappearing 30 years later to start the process again.

Mulder discovers Scully's necklace amongst the collection of things stolen from the victims and rushes to Scully's house, where he discovers Eugene Tooms trying to kill her. They finally subdue Tooms, who is taken to a prison for the criminally insane where he starts to build another nest out of newspaper.

We think it's all over except that, 18 episodes later, we see Tooms try and escape through the food hatch in his door only aborting his attempt when his psychologist visits him. A new regular character gets introduced to the audience in the form of Assistant Director Walter Skinner who, along with The Cigarette Smoking Man, ask Scully to start getting Mulder to work in a more conventional style. At the parole hearing for Eugene Tooms, the psychologist states that Tooms only attacked Scully due to being wrongly accused and, despite Mulder pointing out the changed physiology and other irregularities that Eugene Tooms possesses, the panel release him into the care of an old couple and demand he still sees his Doctor and seeks gainful employment. Meanwhile the discovery of a skeleton of one of the 1933 missing victims doesn’t turn up any conclusive evidence linking Tooms to the murder. 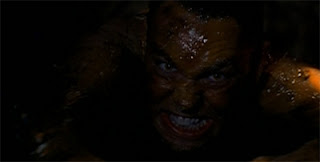 Mulder is beside himself, convinced that Tooms is indeed the 100 year old murderer and starts to stalk him. Tooms breaks into Mulder's apartment and uses his shoeprint to make it look like Mulder has attacked him. Mulder is questioned by the police and forbidden to contact Tooms by Skinner. Tooms kills his psychologist and Mulder believes this is the final death needed for Tooms to hibernate and they rush to Tooms old address searching for his nest. The building has been demolished and in its place are some shops, leading Mulder to crawl beneath an elevator shaft. He finds the nest and is confronted and chased by the monstrous Tooms before dropping the elevator on him and killing him.

This was superb entertainment and a great introduction into the 'Monster of the Week' style episodes that filled The X-Files for so many years. You got great insight into Mulder's stubbornness in his beliefs as well as the ridicule he faces from his colleagues. Scully does her best to scientifically prove things but even she gets a little caught up in the myths. The Cigarette Smoking Man (William B. Davis) is in it just enough to tease a change coming to the way The X-Files are investigated and Mitch Peleggi's Skinner is a welcome addition to the regular cast. It is Doug Hutchison as Eugene Victor Tooms that steals the screen though. The star of Lost and 24 plays Tooms as a typical horror film monster with a slight dash of Anthony Hopkins’ Lecter and he lights up every scene he is in.
Not just the highlight of Season 1 but a real tribute to the show’s best era.