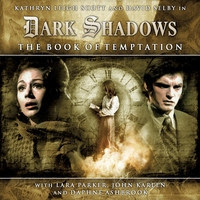 Susan Omand discovers that reading may not be so good for you after all as she listens to the full cast audio drama Dark Shadows: The Book of Temptation from Big Finish...

In a story that flicks between 1926 and now, we catch up with Charlotte Howell, a maid at Collinwood in the 1920s, and also discover what happened directly after the events of the House of Despair, so it helps to have listened to that one first.

In 1926, Charlotte Howell writes in her journal about how she has been in Collinsport for a year and how much it has affected her. She warns any readers against staying at Collinwood because of the terrors she has experienced. In the present, Willie Loomis wakes after the events of The House of Despair and finds himself at the Collinsport Inn being cared for by Maggie Evans. Willie tries to warn her about Barnabas, urging her to leave town, and claims that he has to return to Collinwood because “He” wants him. Maggie, determined to resolve Willie's fear, heads for Collinwood after he falls back to sleep.

Back in 1926, Charlotte writes about being unable to escape from the Collins family and their horrific legacy and wonders why she keeps being drawn back. In the present, Maggie visits Collinwood for the first time in a long time. Quentin Collins greets her, noting her uneasiness at being back at the mansion and Maggie asks him about what happened to Willie but Quentin refuses to tell her. They are interrupted by the witch, Angelique, who seems familiar to Maggie but Angelique lies and claims they have never met. Quentin takes Angelique aside, angry that she is taunting Maggie, and warns her to leave Maggie alone but Angelique remembers that Barnabas, her Barnabas, cared deeply for Maggie and she determines not to let it happen again. Elsewhere in the house, Maggie hears Charlotte's voice pleading for help and goes to investigate. She discovers Charlotte's journal and starts to read.

Barnabas enters, startling Maggie but, at the same time, seeming familiar even though he looks different. He introduces himself as Barnabas, a namesake of the original, and they talk about the missing Collins family and the legend of the Widows’ Wail, something that that Maggie read about in Charlotte’s journal. He takes Maggie back downstairs to Quentin and she reads more aloud from the book. Quentin forces her to stop as a sudden wailing of spirits begins to fill the room. He and Barnabas realise those spirits came from the book and Quentin makes Maggie promise to never read from it again but the wailing gets louder. Barnabas tells Maggie to read the journal from the beginning of the April 26th entry, and, when she mentions the Collins’ name, the wailing stops. They work out that the book’s power comes from many years of different people reading the same words and Barnabas takes Quentin to the room where Maggie found the journal. Charlotte's voice calls out, begging to be left alone. She claims not to have written the book, only to have read it, saying that's how the book works...

What other secrets does the book hold? How are they going to rid the house of the spirits trapped by the words in it? And what does Angelique have planned for Maggie?

Another story in three parts, in a similar form to the House of Despair but, this time, I’m more used to the episodic style and it worked well, building to cliff hanger points and managing to sustain suspense throughout. I’m very much a fan of the more supernatural/ghostly stories in Dark Shadows as opposed to out and out bloody horror, far preferring my scares to be psychological rather than gory. Having a book that traps spirits inside it if they read it was an inspired idea, as writing would have been the more obvious, personal tack to take, and this slightly off-the-wall train of thought was evident throughout in the writing of Scott Handcock, whose Dark Shadows tale The Skin Walkers I have also listened to and enjoyed. He made the most of the characters’ previous relationships and I also found humour in the abrasiveness of the interactions of everyone with Angelique, who manages as usual to rub them all up the wrong way with her supercilious attitude, a testament to both actors and writer, and the confrontations between Angelique and Maggie Evans really paint Angelique as a much more malevolent force than I first thought. Talking of characters, the acting was, as ever, very good with David Selby sublimely frosty this time as one of my favourites, Quentin Collins, and Andrew Collins (too many Collins’?) as the “new” Barnabas Collins, after the events of The House of Despair, settling into the vampiric role well, the script helping that along with knowing asides like him “feeling like a new man”.

As a stand-alone drama, The Book of Temptation is a great listen and it’s going to be interesting to see how it ties in, if it does, with the next one in the series.