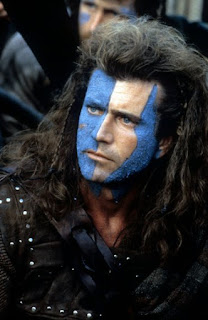 
Winner of five Oscars, the film is based on the poem of The Actes and Deidis of the Illustre and Vallyeant Campioun Schir William Wallace or just "The Wallace" by a 15th century minstrel known as Blind Harry. So in essence, it is a fictionalised account of a fictionalised account, written 172 years after the events on which it is based and has been described as one of the most historically inaccurate modern films. This, however, does not matter a bit as you will see. Skip to the last paragraph if you don’t want spoilers but I think we all know what happens in the end.

The basic story of the film revolves around the lives of William Wallace and King Robert the Bruce.
In 1280, England's King Edward "Longshanks" (Patrick McGoohan) invades and conquers Scotland following the death of Alexander III of Scotland who left no heir to the throne. A young William Wallace witnesses the treachery of Longshanks in a horrific scene of a cottage room full of his hanged kinfolk. The subsequent deaths of his father and brother in the battles that follow, prompting the first meeting as children of Wallace and a little girl called Murron at the funeral, see the young Wallace taken to live his Uncle Argyle (Brian Cox) where he is educated.

While Wallace is away, Longshanks rule spreads throughout Scotland with nobles taking over the lands and English laws, including the law of "Prima Nocte", a rule that conqueror Longshanks had imposed to encourage English land ownership whereby the land-owning lord can have sex with any woman tenant on her wedding night. To quote the king, “If we can’t get them out, we’ll breed them out”.

Years later, now grown up and back in Scotland after living in both France and Rome, Wallace (Mel Gibson) meets and falls in love with his childhood friend, Murron MacClannough (Catherine McCormack). They marry in secret to avoid the "Prima Nocte" rule but are found out. Wallace rescues Murron from being raped by English soldiers, which is seen by the local Lord as a treachery against the King and Murron is captured and publicly executed. In retribution, Wallace slaughters the English garrison and sends the occupying garrison at Lanark back to England.

Wallace rebels against the English, and as his legend spreads, hundreds of Scots from the surrounding clans join him. On September 11, 1297, Wallace leads his army to victory at Stirling Bridge, vastly outnumbered but spurred on by the now infamous “Freedom Speech”. Following their victory, the Scots move forward, sacking the city of York, killing Longshanks' nephew. During his campaign, Wallace seeks help from a young Robert the Bruce (Angus MacFadyen), son of the leper noble Robert the Elder (Ian Bannen) and the chief contender for the Scottish crown. However, young Robert is dominated by his father, who aims to keep the throne of Scotland for his son by bowing down to the English.

The English King sends his son's wife, Isabella of France (Sophie Marceau), to negotiate with Wallace, while he prepares an army to invade Scotland. However, Isabella warns Wallace of the invasion and the Scottish army meet the oncoming English head-on at Falkirk, only to be betrayed by nobles, Lochlan and Mornay, who settle for extra land and money for their absence from the battlefield. As he charges enraged toward the departing Longshanks on horseback, Wallace is intercepted by one of the king's men, who turns out to be Robert the Bruce. Full of remorse at the mess of the battle, Robert gets Wallace to safety before the English can capture him. This is the point at which Robert the Bruce switches sides. Wallace kills Mornay and Lochlan for their betrayal and wages war against the English for the next seven years, assisted by information from Isabella.
Robert, intent on joining Wallace and committing troops to the war, sets up a meeting in Edinburgh but Robert's father has conspired with other nobles to capture Wallace there and hand him over to the English which turns his son completely against him.

In London, Wallace is tried for high treason, and condemned to public torture and beheading. Isabella begs for his life to the King but it is refused and Wallace is hanged, drawn and quartered. As cries for mercy come from the watching crowd as the torture continues, the magistrate offers him one final chance to utter the word "Mercy" and have a quick death. Wallace, with his final breath, shouts one word. "Freedom!”

In 1314, 9 years after Wallace’s death, Robert, now Scotland's king, leads a Scottish army before a ceremonial line of English troops on the fields of Bannockburn where he is to formally accept English rule. As he begins to ride toward the English, he stops and invokes Wallace's memory, imploring his men “You bled with Wallace, now bleed with me” and leads his army into one of the most famous battles in Scottish history, winning the Scots their freedom against the English for the next 400 years.

Epic not only in subject but in length, this is a three hour extravaganza of bloody, violent, horrific, historically inaccurate brilliance. The battle scenes are some of the best in cinema at that time and I had forgotten quite how vicious and gory they were. However, this film is also a story of love, loyalty, revenge and treachery. What it misses out on in facts, it more than makes up for in feeling, capturing the heart of Scottish patriotism and the spirit of revolution, made all the more relevant with the recent independence referendum. You ignore the fact that Mel Gibson is an Americanised Australian playing one of the most important legends in Scottish history. You ignore the fact that the film has been Hollywoodised to the hilt and that much of that Scottish history has been ignored so that it doesn't disrupt a good story. You even, just for a moment, ignore the fact that your best friend in the whole world is actually English, and you just allow yourself to get swept up in the rabble rousing, patriotic fervour of Braveheart and get ready to take back your freedom!