Audio – Dark Shadows: Beyond the Grave 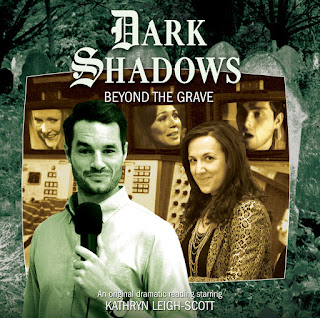 Susan Omand tunes in to a Hallowe’en TV special with a big difference in this episode of Dark Shadows from our friends at Big Finish...

In a complete departure of style from what I have come to expect from Dark Shadows, this episode is the audio from a fictional live TV show from England called Beyond the Grave, where the studio has linked up via satellite with a live broadcast from the cemetery in Collinsport. Think of the “found footage” genre of horror films and you get the idea but this is so much better.

Even Dark Shadows own synopsis of the episode builds on the realism of it.

“Forty years ago, the paranormal television show Beyond the Grave broadcast a very special Halloween episode - live from Collinsport, Maine. Presenters Tom Lacey and Kate Ripperton introduced the nation to the legend of Mad Jack, the local fisherman who had reportedly haunted the town's cemetery for over six decades.

The terrifying events that followed have become infamous. Suppressed and denied by the authorities, the episode was thought lost forever... until now.

Now, for the first time in forty years, you can hear the true horror of that fateful night in Collinsport...”

As the story unfolds we hear interviews from lots of familiar names, talking about the legend of Mad Jack, the noises and strange fishy smells that appear just before some of the strange happenings in Collinsport. All very normal for an episode of Beyond the Grave, until the film crew start to become involved in some of those strange happenings along with the residents. Accidents, murders and demonic possessions all happen in front of the mechanical eyes of the TV cameras and Maggie Evans, owner of the Collinsport Inn, gets her turn in the spotlight, literally, as she becomes a central character in the latter part of the story. As for the legend of Mad Jack himself? Something much darker, and much, much older has manifested. Something which manages to transcend the airwaves themselves. Something which is linked to a very familiar tune...

As a presentation I was very much reminded of War of the Worlds. Yes, it is that good. With no incidental music in the background to belie the fact that this is a “real” broadcast, the addition of white noise and mic feedback, and even an ad break that comes back to haunt the listener later, this is the best production I have listened to for a very long time. The acting is superlative from all players, and there is a larger cast than normal for this outing and the writing is second to none, it is utterly believable as a real show. The best thing about it is that, even being so different in style, the episode still manages to successfully build on the characters and events in order to further the long story arc.

Would this style of programme work again in the series or even as a spin off on its own? I don’t know, it may become old and cliched very quickly, as has happened with the found footage film genre. But for the shock value of a standalone audio event within the series, as a way of jolting the regular Dark Shadows listener out of a comfort zone, a “Bang! This is it,” it works. It works very, very well.