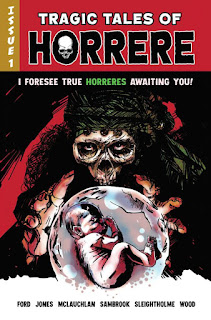 
Horror is not a genre that I have any kind of special ability to break down. I like horror, I grew up reading Dean Koontz and Stephen King, like most people I know, and I like horror films, however I’m not a buff that can go into intricate detail about various sections of the genre. I like what I like and that’s about it. Horror comics are quite a new phenomenon to me. What I have read I have enjoyed but I find the medium a difficult one to get across the fear and shock value that you would expect from, say, a horror film, plus most of the stuff out there is pretty much vampires or zombies, two character tropes that hold no interest for me at all. The Chair, soon to be a film, from Alterna comics is where I set my bar when it comes to reviewing horror comics. Great story, dark art, message delivered with no fuss or frills, that’s what I want from a comic of this nature and, to be fair, Horrere #1 is nearly there.

The cover by Alisdair Wood at first glance is just a good piece of art but not horrific, until you look closely and see that the baby at the bottom of the picture is actually looking at you, not in your direction, actually into you. Creepy in a subtle way and bodes well for the inside content. After a dedication to Christopher Lee and Wes Craven, which is really nice to see considering the two men’s influence on the genre, we are into story one – If You Go Down To The Woods Today which see joint writing credits for Rob Jones, who also letters the entire anthology, and Michael Sambrook with art by Neil Ford. The story is one that shows that human nature is often the monster in life and Ford’s art is heavily reliant on dark blocks of black which complement the feel of the story really well and makes If You Go Down To The Woods Today a superb jump in point and great opening.

The Aufhocker is again from the pens of Jones and Sambrook but this time incorporates the art Alastair McLauchlan which is stunning! I’m not sure a thesaurus would contain enough words to describe what I thought of McLauchlan's art. It was creepy, it was dark in all the right places, it jumped off the page at the same time as being subtle which is quite a neat trick and, whilst I liked the story, I was left feeling that maybe it could have been longer. It didn’t feel rushed, it just got to its finale far too quickly for my liking and is maybe an idea that could and should be developed as a standalone title for a future issue.

You Are What You Eat from Jones and Sambrook sees Gareth Sleightholme take up art duties. Whilst I still enjoyed the story in principle, it was definitely for me the weakest of the stories but what incredible panel layout and art. Sleightholme doesn’t use the ‘less is more’ style from the first two stories instead deciding to pack his panels in such a busy way with so much going on but at no point did it feel too much. The quality of the art and the detail involved in each panel is at a level you would expect from a (no disrespect meant) bigger publisher. If anyone ever needs proof that the creative quality in creator owned products is on a par with multi-national companies just show them the panels from You Are What You Eat. I’d like to see Sleightholme and this style in a story that is more to my liking in the future and is definitely an artist I’m going to seek out. 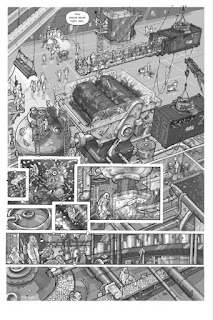 Grimoire: Baby Bell Jar contains art from the front cover illustrator Alisdair Wood to compliment the story again from Jones and Sambrook. Jones and Sambrook excel here, taking something genuinely creepy from horror days gone by, carnivals and freak shows, and actually put something quite frightening on the page. Wood’s scratchy pencil style with realistic backdrops of houses and cars suits the story perfectly and luckily this is going to be an ongoing story which is great news as it was a freaky, chilling joy to read with a fantastic cliff-hanger.

The back cover by Ian McQue is a sight to behold and possibly a coup for such a small publishing house to manage to get an artist of this calibre on board. That being said, the artists involved in the Horrere #1 anthology have raised the bar for indie comics themselves and each impresses in a different way, which is probably the most pleasing aspect of the entire comic.

A great starting point for those who are maybe not a fan of the genre, a superb read for those who like horror comics and a definite project to keep your eyes on in the future.

Horrere can be ordered here.
Email ThisBlogThis!Share to TwitterShare to Facebook