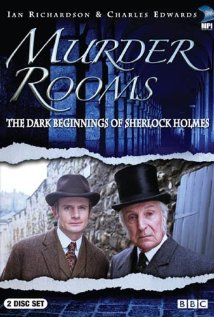 Steve Taylor-Bryant steps into the streets of Victorian Edinburgh to look back on Murder Rooms: The Dark Beginnings of Sherlock Holmes...


Produced by the BBC in 2000/1 Murder Rooms is based upon Sir Arthur Conan Doyle's inspiration behind the creation of Sherlock Holmes, Dr. Joseph Bell. There was an original teleplay called The Dark Beginnings of Sherlock Holmes but, as a younger man, I saw the four separate adventures and it's these I wish to pay homage to today.

Starring Ian Richardson (House of Cards/Brazil) as Dr. Joseph Bell and Charles Edwards (Downton Abbey) as a young Arthur Conan Doyle, the episodes play out as any good detective drama should and it is obviously a work of fiction but does nevertheless give great insight into where Conan Doyle got his inspiration for the world's most famous sleuth.

Dr. Arthur Conan Doyle and his mentor Dr. Joseph Bell investigate the case of a woman who believes she's being followed by an apparition while bicycling along a lonely road.

Dr. Arthur Conan Doyle and his mentor Dr. Joseph Bell investigate the strangulation deaths of two persons found floating in the river, as Doyle finds himself captivated by spiritualism.

The Kingdom Of Bones

A museum curator hires two professors (one being Dr. Joseph Bell) to publicly unwrap an Egyptian mummy but it proves to be a man's three-week-old corpse.

Dr. Joseph Bell helps the police investigate the murder of a money lender but old animosity between him and the officer in charge leads to conflict.

These four tales are a lot darker than any Sherlock Holmes adaptation had been up to that time. There was an eeriness and underlying violent feel to all of them, a sort of Baskerville meets Jack the Ripper feel if you'll allow. The Victorian sets were astonishingly good and allowed the drama to unfold with a sense of realism, gripping you each ninety minutes that the show was aired. The writers are from all walks of life but had done their apprenticeships on some of the United Kingdom's best shows and each episode is enthralling with a style much lacking in modern day televisual delights.

Charles Edwards as the young Conan Doyle was incredibly watchable, intelligent and showed an eagerness to learn from his experienced partner but at the same time was no lap dog, questioning passionately Bell's evidence or theories when they were to unbelievable to comprehend. He had a great chemistry with the vastly more experienced Ian Richardson and the fondness came across on the screen, leading you to believe that Conan Doyle himself got on very well with the real Dr. Bell.

Ian Richardson is a master of the character acting skillset and has given decades worth of sterling performances on both stage and screen. I remember him well from watching House of Cards with my father and being spellbound by his evil portrayal of Chief Whip Francis Urquhart as he looked to ruin the new Prime Minister. As Dr. Joseph Bell, Richardson uses less arrogance than any Sherlock incarnation but still demands your attention. He is a stern academic whose on screen presence is electrifying.

I was hoping for more adventures but alas none came which is a crying shame as it was a highlight of the BBC's programming in that era.

A must watch for Detective fans, Sherlock Holmes enthusiasts and fans of great television writing.