Book - The Body I Live In 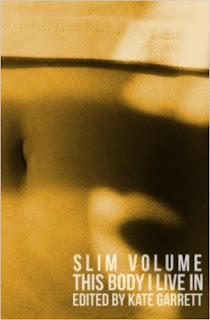 Susan Omand discovers a whole new "body" of work in the latest Slim Volume from Pankhearst, edited by Kate Garrett...

This opening quote from Herman Hesse sets the tone for This Body I Live In. It encapsulates the feel of all the stories and poems within this new slim volume collection from Pankhearst because it covers, as the title suggests, people’s own feelings about the inner and outer workings of themselves and others.


A collection of physical experience. From a shower in the Bermuda rain to a private moment with a mannequin. Birth and death, sex and drugs. A stranger's gift of fruit.

As I’ve come to expect, and really enjoy, from Pankhearst Slim Volumes, this little book pulls no punches when it comes to the human aspect, it’s just put out there, literally warts, scars and all. There’s no cushioning from reality, no “hearts and flowers” idealism or steamy titillation for the sake of it. No, this book is not for the faint hearted as it deals with sex and drugs (and a little rock and roll) in a way that definitely doesn’t glamorise but that also doesn’t make the writing any less impactful and even beautiful in its own way.

With titles like To The Beautiful Man Who Gave Me Free Plums and Another Poem About Infertility you know you’re not going to get anything run of the mill here and every dip into the book is going to come back with something related and yet totally different to the last time. From subjects as heavy as existentialism to the, on the surface at least, flippancy of frank self appraisal there is something for every woman to identify with. Yes, I said woman. Why be so gender-specific? Because, firstly, I don’t think a man would pick up a book with this title or cover, whether those choices were intentional or not I can’t say. Secondly, to my mind, women relate more to how they see themselves to identify who they are whereas men tend to pick up more on how others see them, so I don’t think the introspection of this collection would interest or engage across the board. That said though, I’m not saying that men are to be excluded in this, deliberately or otherwise and, indeed there are works included here that are by men, I just don’t think they are the intended audience. As one of the stories says “...men are from Mars and women, Venus. Like we don’t know already!”

A refreshingly unequivocal look at ourselves through the words of others, This Body I Live In has encouraged me at least to rethink my inner language because some of these stories hit closer to home than they maybe should have. Enjoy the discomfort.