Documentary - Erebus: Into the Unknown 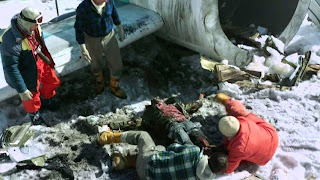 Steve Taylor-Bryant takes on a powerful documentary about an air disaster over the Antarctic as he watches Erebus: Into the Unknown...


I’m not the best researching a topic before I review. I'd love to say it's because I don't want the Public Relations brief to have an adverse effect on what I may or may not think about a product, but quite honestly I'm naturally a lazy person and so I don't read them. Therefore when it came to reviewing Erebus: Into the Unknown I genuinely thought I'd be sitting through an episode of Air Crash Investigation. I was very wrong. Instead I found myself bouncing up and down the entire emotional spectrum as I viewed one of the most powerful documentaries I have ever seen.

The 28th of November 1979 saw one of the worst air tragedies on record. An Air New Zealand airliner carrying over 250 passengers and crew went missing over Antarctica whilst on a sightseeing tour. The plane had flown directly into Mount Erebus and, within hours of the disaster, a group of regular police officers were flown out to Antarctica and quickly trained in the recovery of bodies in such formidable conditions. With the sea ice due to melt away within weeks the group had fourteen days to train and carry out the mission. What the men faced was horrific. Carnage and bodies spread out over one of the most inhospitable places on the planet. At one point the men were identifying body parts by looking at the severed hands of victims, determining whether they were female by nail varnish and wedding rings.

The men also discovered items belonging to the crew, including the Captain’s notebook with coordinate information and, at the base a few miles away, an investigative pilot was examining the black box information to determine what actually happened to the flight that day.

Air New Zealand advertised Antarctica trips at 2000 feet, about 9000 below safe limits and whilst they knew they were culpable they tried to bury the pertinent information in the following enquiry. The Captain’s notebook pages had strangely gone missing along with other items that were on the men’s findings.

The men themselves returned to no fanfare, discussion or support network and were left to mentally fend for themselves even though the things they had seen and done were so horrific.

The film makers of Erebus: Into the Unknown have not just produced a thought provoking documentary, they have designed a thoughtful one. The cover up and, what I deem horrendously illegal, acts by Air New Zealand are covered but not in a highly political or “tabloid exploitation” way, instead the information is just there for the viewer to gain context and make their own minds up. I am not usually a fan of dramatised events within a documentary but the scenes set by the director and the cast go hand in hand with the officers’ own personal accounts, filmed, I believe, for the first time talking about the events of that period. Whilst the horrifying scene is set and some of the scenes are highly graphic for those with a weak constitution, there is a delicate touch to the way the film runs and at no point did I feel that the relatives of the lost souls would be unhappy at the documentary. The honesty of the officers and the cracks in their voices as they talk about their task brought me to my lowest ebb on many an occasion, and the conduct of the head of Air New Zealand took me to the angriest I have felt in a long time.

This is by far the best documentary I have ever seen. Powerful, at times horrendous viewing, thoughtful and yet educational. Bravo.