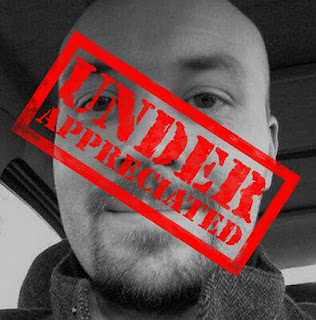 In his occasional column, SF and contemporary fiction author Neil Vogler highlights and champions creative works that he feels have been unjustly overlooked in our collective cultural memories. This time it's the Marvel comic character, Death's Head...

I don’t regularly read a lot of comics these days – I still love the art form, but I’m generally to be found devouring novels instead. In the late Eighties, however, I read a lot of them and some of them had a greater impact on me than others. Though I loved Marvel’s Amazing Spider-Man and Uncanny X-Men and I would pick up the occasional DC title, I was always drawn more towards future-set science fiction, and I particularly loved 2000AD and the likes of Judge Dredd and Rogue Trooper. One Marvel character that seemed to really sear itself into my brain, however, was the futuristic mech bounty hunter Death’s Head, a character who these days seems inexplicably doomed to be a third-tier player in Marvel’s labyrinthine comic universe.

As is typical of so many comic book characters launched in the Eighties, Death’s Head has a ridiculously convoluted history in comics, but I’ll try to keep things as simple as I can for the sake of brevity. Effectively it goes like this: in 1987 the brilliant comic book writer Simon Furman had an idea for a very cool one-off villain for the Transformers run of Marvel UK comics, but, being a man of foresight and wisdom (and, presumably, having a strong awareness of all the tricky licensing and trademark laws surrounding comic characters and their usage) he thought it would be wise for Marvel to retain the rights to the character, just in case there was further potential for Death’s Head in the wider Marvel universe. Therefore he conceived of a single-page Death’s Head tale called High Noon, Tex! that would appear in all of Marvel’s titles at the time and serve as a brief and potent introduction to the character. The story would not only prime people for Death’s Head’s forthcoming appearance in Transformers, it would ensure that, because Marvel had used him in print first, Hasbro wouldn’t retain any rights over the character, and Marvel could therefore use him down the line.

Cue the involvement of artist Geoff Senior, who came up with the final design for Death’s Head, and created the mechanoid’s iconic look. Here’s the original one-page story that kicked the whole thing off: 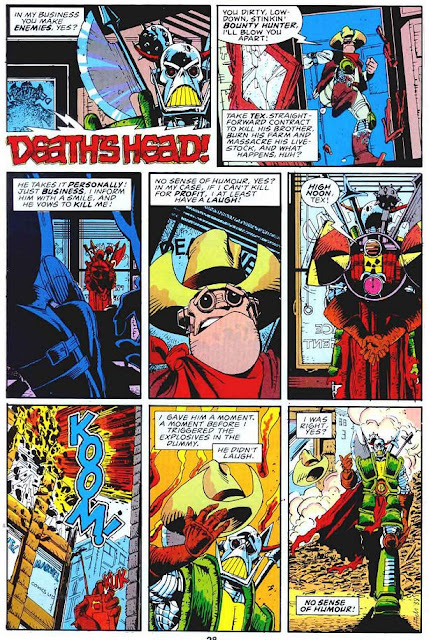 So, Death’s Head has a kind of mechanized devil’s face, complete with horns, expressive eyebrows, and sharp spikes on the edges of his mouth. He also has a weird sense of humour, no moral qualms, a strong work ethic, and a penchant for blowing things up. It’s safe to say I liked him immediately.

Death’s Head went on to appear in a huge run of the UK Transformers comic (beginning in issue #113 and ending in issue #151, according to my trusted sources), where he featured heavily in the Galvatron Saga. I remember very little of this, to be honest, as I wasn’t a voracious consumer of Transformers comics, but apparently Death’s Head made a great impact on certain sections of the comic-buying community, enough for Marvel to consider giving the character his own series.

Personally, I first became properly interested in Death’s Head when he encountered the seventh incarnation of the Doctor in a comic story called “The Crossroads of Time”. At the end of his story in Transformers, Death’s Head has supposedly fallen into a time portal, and whilst bouncing around the timestream he happens to collide with the TARDIS. In the story, a moody Doctor Who then reduces him to human size and sends him careering through time again, where the “freelance peacekeeping agent” (as he insists on being called – don’t call him a bounty hunter) brushes up against futuristic government agents Dragon’s Claws on Earth in the year 8162.

At this point, I was hooked, and I was also in luck, because Death’s Head was about to star in his own dedicated title. Unsurprisingly named Death’s Head, it was to run for ten glorious issues, from December 1988 to September 1989.

Defeated by Dragon’s Claws and ripped to pieces by their leader after a prolonged and brutal fight, Death’s Head is rebuilt by a human, Spratt (who looks like a beardless hipster from 2015, strangely enough), and he becomes the mechanoid’s de facto partner in the freelance peacekeeping business. Now sporting an iconic new look, Death’s Head gets back to what he does best, and over the course his ten-issue run he even acquires his own rogue’s gallery of villains to face. That gallery includes villains like Dead Cert, Plaguedog, Photofit and more, all of whom have their own unique gimmicks and all of whom make for very funny and action-packed reading.

As the ten original issues tick by we learn more about Death’s Head’s previous jobs, we see him fight and ultimately best a selection of colourful opponents, we see him navigate his way around Earth and the surrounds circa 8162, and we see him gradually warm up to the idea of having a partner in the killing business. The whole run has a dark edge and a humorous flavour, and aged around twelve I thought it was one of the best comics I’d ever read.

Sadly, after that initial run of ten issues the Death’s Head comic was discontinued. All these years later, some of those amazing panels are still stuck in my head (and the word “splutch” pops into my head a lot, courtesy of a certain story).

Death’s Head has a get-up rendered in big primary colours, he has one of those profiles that is instantly recognisable even in silhouette, he’s capable, expressive, violent, funny, has his own particularly quirky code of behaviour, has seen it all and killed it all, and has a detachable arm that can be swapped for a variety of weapon-related attachments (he generally carries those attachments on his back). He has all this and a cape. He’s one of the coolest comic book characters Marvel ever came up with, and all of those original dedicated Death’s Head stories are pulpy, subversive fun, and way ahead of their time. So why the hell isn’t he more popular?

The character was eventually jettisoned for Death’s Head 2, which seemingly ditched everything that made the character so unique in the first place (and came from an entirely different creative team). Since then, the original Death’s Head has popped up here and there a couple of times across the Marvel universe, acquiring a dodgy origin story and interacting with the standard pantheon of heroes in stuff like Marvel Heroes (2011) and Marvel NOW! (2013). But he’s yet to regain his own dedicated title.

Personally, I think there’s a huge potential market for a Death’s Head renaissance, spearheaded by a movie. With the likes of Guardians of the Galaxy and Avengers: Age of Ultron giving cinemagoers far crazier glimpses of the Marvel universe, I believe the audience is there for a harder-edged, action-packed, futuristic sci-fi thriller with a moody mechanoid bounty hunter as its main character.

If you handled it correctly, if you got the tone of the property exactly right, I think you could have a character that could crossover with fans of the likes of Guardians and Thor as well as those who like the harder-edged stuff such as Dredd or Blade. The same people that go to see movies like John Wick or Mad Max: Fury Road would absolutely lap up a tale of a futuristic bounty hunter with a bad attitude and a weird sense of humour that can’t resist getting into situations where he’s outgunned and outnumbered.

Hell, if you got it really right, you could have a breakout character on your hands whose look is as iconic as Darth Vader’s, and just as merchandisable. 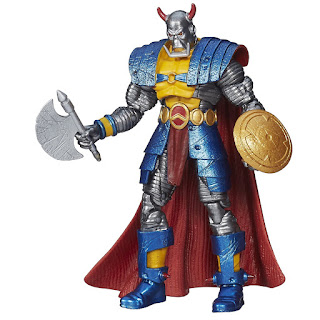 Since this is my article and it’s already long anyway, here’s what *I* would do. First of all, get Paul Verhoeven to direct the movie. This movie needs to have vicious biting satire pouring out of every frame, buckets of blood, and should be suffused with dark subversive humour. Next, hire someone with an enormous build to play Death’s Head – someone absurdly tall and well-muscled – and get them to wear a green VFX mask on their head so his face can be mo-capped. Then, hire someone with an unbelievably laconic delivery to provide the voice and the facial features (I actually think Michael Shannon has the perfect voice and attitude for Death’s Head), and then cast someone like Matt Smith as Spratt, someone who can babble and bungle their way through the movie and yet still feel like part of that world and still be watchable on their own. Actually, with Spratt you could cast against the comic and make the character a woman, or change the ethnicity and the gender. All that matters is that Spratt is a genius, scavenger type, a wise-cracking future rat that Death’s Head can only barely tolerate.

I’d advise keeping the future-Earth post-apocalyptic setting, but I wouldn’t worry about setting it in 8162, as that seems a little far off. Something like 2562 would be better. Have the plot kick off with the merciless mech bounty hunter getting ripped off and ambushed on a job; let’s say he’s sent to a notorious asteroid spaceport kill the head of an organisation that specialises in illegal human trafficking to shady offworld alien slaveworlds. The job goes bad and Death’s Head is double-crossed and blown up; his ragged remains are jettisoned with a bunch of thought-to-be defective (read: dying and unsellable) human slaves. The jettisoned pod ends up on some rubble-strewn ruin of a planet, and only one of the humans survives the crash; a supremely resourceful, fast-talking scav from Earth named Spratt, who used subdermal biotech to fool the slavers into thinking he had an incurable disease. Spratt rebuilds Death’s Head gradually, and the two of them end up hijacking a visiting tourist ship (because in the future, the rich like to take trips where they get to gawp at the ruins of former human outposts). They get back to Earth, where Spratt finishes his Death’s Head upgrade. Death’s Head, newly reinvigorated and now sporting his iconic look, blasts back into the freelance peacekeeping business, reluctantly agreeing to take Spratt on as his new partner. Over the course of the movie Death’s Head takes numerous “rogue’s gallery” targets down, pieces together who double-crossed him, and finishes up the film with a 25-minute action-packed, ultra-violent shootout at the very same asteroid spaceport where he was originally destroyed – only this time the navigation and gravity systems have been blown out in an explosion, and the spaceport is on a direct collision course with the sun…

Yeah, I know. I should stick to writing novels. But a fan can dream…

To sum up, then: Death’s Head is a horribly under-utilised comic character that you should know about, and his original run had a big impact on me. Do yourself a favour and seek out his issues, yes?

Oh and Marvel: call me about the movie. I’m pretty confident I can get that script together quickly…