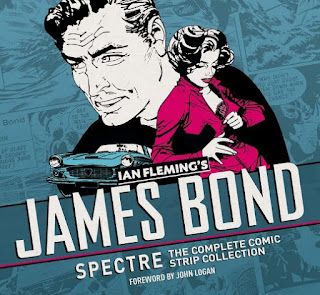 Susan Omand is licensed to quill (sorry) as she writes about the latest from Titan Books, Ian Fleming’s James Bond: SPECTRE, the Complete Comic Strip Collection...

Back in the day when people still read proper newspapers made out of paper, there was often a page of comic strips beside the crossword and the TV listings. Sometimes these comic strips were funny, topical or political but at other times the three panel strip format was used to serialise a currently popular novel and that is what Ian Fleming’s James Bond: SPECTRE, the Complete Comic Strip Collection is. Digitally reproduced and gathered together for the first time, this book contains the comic strips that serialise four of the best known James Bond novels, all of which chart the rise of the SPECTRE organisation and the work of Bond’s nemesis, Ernst Stavro Blofeld. Three of the novels, Thunderball, On Her Majesty’s Secret Service and You Only Live Twice have art by John McLusky and the fourth, The Spy Who Loved Me, has art by Yaroslav Horak and is noticeably different in style. Including the work of two different artists in the collection was a very good idea as it mirrors the thought of having different actors playing the role of Bond in the films to have a different hand drawing him for different stories and everyone will have their own favourite. The style of the art of both may be considered dated, as the fashions, social conventions and settings are very much of their time – short skirts and cigarettes abound - but this is no bad thing as it really helps to set the scene and maintain the atmosphere of the stories.

I’ll not go into the stories themselves as they stick closely to the plots of their respective novels although they have, of course, been adapted and condensed to fit into a daily strip format, managing to get some plot or action into each stand alone strip as well as offering continuation over the series and even between series. You must remember when reading the strips that they are very much contemporary to the novels too being the early sixties. Bond is not the gadget loving, tuxedo wearing superspy of the films and it is heartening to see the females in the stories are, as in the books, more essential to the plot than the films’ “Bond Girls” ever were. Ian Fleming himself is credited on the comic strips as the writer for all of them but the adaptations were done by different people, as Henry Gammidge worked with McLusky and Jim Lawrence worked with Horak to produce the strips themselves. The foreword by John Logan, screenwriter for SPECTRE and Skyfall among many other films, is a great inclusion for the book as it gives a lot of insight into the Bond that is portrayed both in books and films and Logan also gives background information about his own relationship with the Bond character. I was especially interested that he made a point of re-reading the novels before working on Skyfall as I think this connection with the literary character is very evident in the film itself.

As always with Titan Books, the layout and quality are top notch, making this hardback book a worthy addition to any James Bond collection as part of the history of the world’s most famous fictional spy.