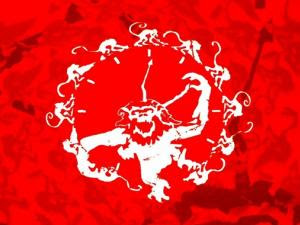 
I am insane. And you are my insanity.

Time travel is a massively overused trope in science fiction. Books, comics, films and television are full of time travelling adventures all with their own take on how any interaction in the past is going to affect the future. Do you go back and just observe history as it happens? Perhaps with strict guidelines about not touching anything? Do you travel into the past and mess with timelines on purpose to change the future? Maybe to save humanity or avert a disaster? We all have something we'd do differently if given the opportunity so it's no surprise that the action appears in popular culture as often as it does.

However it's not always done well. It's often used because it can be, to escape an impossible situation because the writer can't dream up a more plausible plan, not because it should be and for every great time travel moment there are twenty poor attempts at using it for entertainment. That's not to say it can't be brilliant when great people attempt to bring it to our screens though. Duncan Jones' Source Code is a recent take on the idea that worked incredibly well but it was long time before the Gyllenhaal vehicle since we'd had a real corker of a film that included everything you want in a time travel movie and none of the flim flam you don't. All the way back to the mid nineties in fact and Terry Gilliam's Twelve Monkeys.

It is sometime in the future and a virus, deliberately released in 1996, has killed off five billion people. Survivors established underground colonies because the surface is now uninhabitable and prisoners "volunteer" to gather insects to test for the presence of the virus.

One of these prisoners is James Cole who is sent back in time to 1996 to find out more about the responsible group, "The Army of 12 Monkeys." The time travel causes Cole to remember events from his childhood, like a shooting at an airport, and a miscalculation sends Cole to 1990 and an insane asylum. The psychiatrist, Kathryn Railly, thinks she has met Cole before but he is still locked up with other inmates. He meets another patient Jeffrey Goines who tries to help him escape and Cole is transported back to his present, questioned and sent out again, this time to the battlefields of World War I where he is wounded.

These mistimed visits prove crucial as, when Cole does get to 1996, he finds that Jeffrey Goines is out of the asylum, working for his virologist father and has formed "The Army of 12 Monkeys." Cole also kidnaps Dr Railly and tries to convince her that he is from the future and they are in danger. He decides that he wants to stay in 1996 with Dr. Railly and she believes Cole knows something of future events. Finding a World War I bullet in Cole's leg makes her check an old photo which shows Cole in the trenches. She becomes convinced that "The Army of 12 Monkeys" is a threat and persuades Cole to try again to find answers. When Goines and his "Army" release the animals in the Zoo, Cole realises that the "Army" is not the threat and leaves a phone message on a special number for the scientists of his own present. Shortly after, a fellow "volunteer" from his present, Jose, approaches Cole with orders for him to complete his mission, handing him a revolver. Cole refuses but it is made clear Dr Railly will be killed if Cole does not conform.

Meanwhile, the police are after Cole for kidnapping Dr. Railly and, while attempting with Cole to escape, she recognises a man who worked in Goines's father’s lab. She informs Cole and frantically identifies him, along with his itinerary, with Jose overhearing. The man goes through airport security persuading them that his biological samples, one for each city on his route, are harmless. As Railly and Cole attempt to stop him, Cole is shot by police and the man escapes to board his plane. Cole's death is witnessed by a boy – it’s himself.

On the plane, the man gets into conversation with another passenger, who is the lead scientist from Cole's present. Cole had stated once the virus was located, a scientist would be sent back to study it in its original form so that a cure could be developed. She identifies herself as "Jones" and says she's "in insurance." 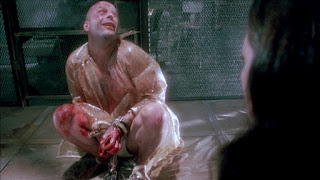 If there is a flaw in Twelve Monkeys I cannot find it and, trust me, I have watched the film enough times that it would have made itself known to me by now. The story itself is quite a simple tale of a catastrophic outbreak that kills off most of humanity and, with added time travel, it might be averted. It really is that simple but with David and Janet Peoples’ script they have taken the simplistic and added such rich characters that the result is astonishing. The key to Twelve Monkeys working is right there on the screenplay pages, there are no short cuts taken, nothing is added for gloss or kicks, it is just incredible storytelling, a superb plot and dialogue deserving of more than the writing nominations that the Peoples’ achieved with the Saturn Awards. The script deserved at the very least an Oscar nod, although with all the acting awards and nominations it picked up (Brad Pitt gained a Best Supporting Actor Oscar nomination, won the Golden Globe in the same category and various other top awards) you can see that, without the excellent writing, the actors wouldn’t have had the tools to do their job. I have talked before about how Terry Gilliam gets his casting spot on nearly all the time and Twelve Monkeys was as perfect as it could have been in this regard. Gilliam’s original vision was to cast Jeff Bridges from his previous film The Fisher King but the studio wanted a slightly more famous name. Bruce Willis, who lost out to Bridges in The Fisher King auditions had met with Gilliam before and had impressed the director, despite Gilliam listing many ‘Willis On-Screen Cliches’ he wasn’t a fan of. However they had agreed to try and do a project together and so, when the studio vetoed Bridges, Gilliam turned to Willis, who was so desperate to finally work with the director that he took a massive pay cut and didn’t actually receive any money until after the film’s release as he didn’t want his star appeal to be what disrupted the budget.

Whilst Willis brought his snarly drawl to the screen as you expect from him, he also showed he had quite a range and some of his more sensitive moments and scenes of confusion play on-screen like the seasoned professional sometimes people forget he is. One of the things that makes Twelve Monkeys stand out from normal action/time travel stories is Willis and his handling of the emotional turmoil that time travel gives, never knowing what’s real and where he really is. As Dr. Kathryn Railly, Madeline Stowe was just brilliant. Caring, yet emotionally hard when required, Stowe was a convincing foil to Willis and the chemistry struck a balance not achieved by many lead stars, which meant buying into the characters as a viewer was effortless. But there was one piece of casting that was just a stroke of genius and makes it impossible to think of anyone else in the role now and that was Brad Pitt as Jeffrey Goines. Whilst Pitt was quite the famous star by the time Twelve Monkeys came out (Interview With A Vampire, Legends of the Fall and Se7en were all released whilst Twelve Monkeys was in production) he was relatively low down people’s list of stars when Twelve Monkeys was first touted but, in my opinion, produces one of the best performances by ANY actor ever committed to celluloid. His face acted as much as his speech and I am still amazed by his portrayal every time I watch the film. The scenes in the mental hospital are unrivalled by any performance he has done since and, let’s face it, he is a top, top star.

When I was institutionalized, my brain was studied exhaustively in the guise of mental health. I was interrogated, I was x-rayed, I was examined thoroughly.Then, they took everything about me and put it into a computer where they created this model of my mind. Yes! Using that model they managed to generate every thought I could possibly have in the next, say, 10 years. Which they then filtered through a probability matrix of some kind to - to determine everything I was gonna do in that period. So you see, she knew I was gonna lead the Army of the Twelve Monkeys into the pages of history before it ever even occurred to me. She knows everything I'm ever gonna do before I know it myself. How's that? 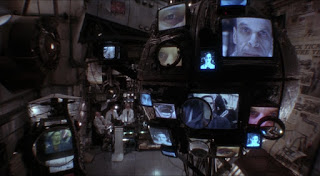 With a script as good as the Peoples had produced and talent to work with that were all as committed to Gilliam and the project as the main three were you would expect Gilliam to just breeze through filming… but this is Terry Gilliam. That doesn’t happen. There were still meddling producers, Charles Roven pops up quite a lot in the troubled history of Terry Gilliam trying to make films, and budget constraints. There was still Gilliam himself with his demanding of perfection which meant complete days were committed to small scenes that should have been filmed in mere moments but it’s in Gilliam’s insistence for perfection that the perfect recipe starts to cook. There is no point in having a great script and a top notch cast if you aren’t going to do your best to bring it all together. Gilliam had scenes built that were both futuristic and present at the same time and instantly allow the viewer to know they are watching a Gilliam movie and his artistic eye is as good in Twelve Monkeys as it is in any of his projects. His wide angle way of filming brings to reality the desolation he shows on-screen but, when it’s all about the dialogue, he returns to the simple and uses lots of plain backgrounds, lacking in clutter, to allow the actors to tell their story. The most important ‘Gilliam’ factor though in Twelve Monkeys success? Final Cut! Gilliam, and many directors in Hollywood’s studio system, forgo Final Cut to work. Once a film is made the studio executives put on their money goggles and work out which edit makes the most financial sense, which has ruined more than one film in the history of cinema. Gilliam had battled Universal before, when making Brazil, but had convinced someone to give him Final Cut. Test screenings failed to excite an audience and studio executives and marketing men were exploding all over Hollywood but Gilliam trusted his vision, kept his film as it was with his Final Cut and now the film is in my Top 5 of all time, made more money than it was expected to (depending on where you get the figures from Twelve Monkeys has possibly made five times its budget) and has seeped into a new generation of film fans keeping its popularity today nearly twenty years after its release.

This is Gilliam’s best film for sure and a lesson to studios not to mess around directors on Final Cut, but it’s not wholly a Gilliam film. More than any other project of Gilliam’s, a team of people came together at the right time with the right ideals and set the bar higher.