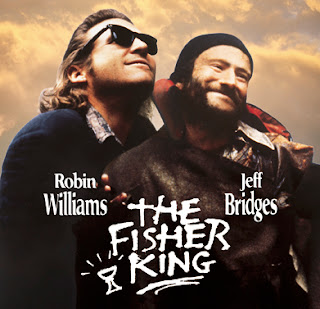 Ian Ham joins the family at /G-f to celebrate his love of a nineties gem from Terry Gilliam. The thoughts of Ian on The Fisher King...

Have you seen ‘The Fisher King’? No? Well go away and fix this terrible situation at once. Bookmark this page and come back here when you’ve watched it. You won’t be disappointed.

Right, finished it? If not, you’ve just missed out on one of the most underrated films of the nineties. It’s a film that works very well on many levels, and gets better each time you watch it. At first glance you’ve got Gilliam’s trademark grimy visuals showing the story of an insane tramp and a washed up DJ. You have a love story, greed, redemption and eventually a happily-ever-after. And this was the simplistic way I first saw this film; on a tiny VHS quality screen and probably very late at night.

After the occasional casual repeated viewings over the years, it gradually occurred to me that this was a very intelligent and well written film, and there are (as with all good stories), many levels to interpret this story. For example, I assumed for years that the title of the film referred to Robin Williams’ character, Parry, and watched the film without really considering otherwise. I watched a funny film starring a comedian and directed by an ex-Python, and set my expectations accordingly. With the passage of time, and having seen a little more of life, it’s become obvious that it is in fact the story of Jeff Bridges’ character, Jack. At the start of the film, Jack is a successful shock jock with all the trapping that that entails. He has the fancy apartment and the trophy girlfriend. All this is taken away when he unwittingly encourages a mentally unstable listener to go on a shooting spree. When Jack realises what he’s done, his comfy life unravels. This is a tale of vanity and hubris, and Jack’s long downfall and eventual redemption at the hands of an unlikely saviour, Parry the Fisher King, an eccentric homeless man with slight vigilante tendencies. It is also peppered with Arthurian mythology; the Grail, a “castle”, Percival (or Parry). And the more you read of the Arthurian legend of the Fisher King, the more you realise how detailed the film is. 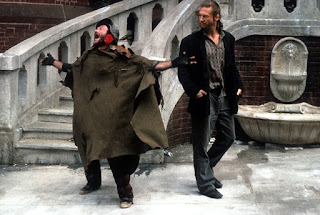 Unfortunately, one can’t help viewing Williams’ performance with the light of recent events. Gilliam has said that the film has been cast in a new light since the death of Robin Williams. He said that Williams didn’t need any direction in the scenes where he’s being chased by the Red Knight as “he believed that was true. He knew the darker side and what it means to have demons”. He manages to utterly steal every scene he’s in (which is quite an achievement when you’re playing against Jeff Bridges). We follow these two characters on their respective journeys throughout the film as Jack attempts to help Parry talk to Lydia, the object of his affections, and ends up almost accidentally redeeming himself in the process.

Terry Gilliam took on the challenge of directing ‘The Fisher King’ after two bruising big budget experiences with ‘Brazil’ and ‘The Adventures of Baron Munchausen’. It was a surprising choice as he apparently had three rules in life at the time:

He’d never again work for a major studio, and

‘The Fisher King’ breaks all these rules, and is all the better for it. He takes Richard LaGravenese wonderful script and leaves it almost untouched apart from the addition of the magnificent New York Grand Central Station ballroom dancing scene as the original wasn’t working as written. As soon as Parry sees Lydia in the crowd, everyone surrounding them suddenly stop rushing to work and starts pairing up and waltzing while Parry follows her.

The supporting cast are all excellent, with a specific mention for Mercedes Ruehl who won the Academy Award for Best Supporting Actress for her role, and Michael Jeter as the cabaret singer.

So, I urge you to acquire a copy of ‘The Fisher King’ and watch it as soon as possible. And to also join me in freeing up the little guy.