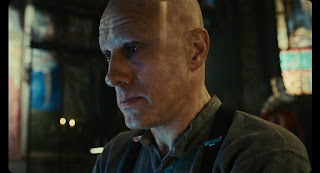 Steve Taylor-Bryant ignores Management and follows the mind of Terry Gilliam into The Zero Theorem...


I'm sorry to interrupt, but I couldn't help but notice this young lady's pathological attempt to project upon you her daddy issues of abandonment...

What is the meaning of life? Why are we all here? What is our purpose? These are all highly emotive and very deep questions and the answers, if we ever find them, will be personal ones that are different to your friends and neighbours. These are questions asked within religion but also asked by those of us of no faith and its sheer breadth of possibility is staggering and very hard to put into words let alone onto screen. But that's just what Terry Gilliam has managed to do with The Zero Theorem and he has done it in such a way that each individual viewer will take from the film what they choose to take. No viewing is the same, there is no grand 'one size fits all' answer here and that, my friends, is some darn clever filmmaking.

The basic plot, the glue that holds some semblance of a story together, is that of Qohen Leth, a socially awkward computer programmer that is tasked by the elusive management to prove The Zero Theorem, that the universe ends in nothing, a problem for a man who is searching for the everything, for his own meaning. That's pretty much it. That's all that every viewer will take home that is the same as the person next to them. Everything else in the film is your very own cathartic experience, your own personal hell or utopia. For me, The Zero Theorem holds a mirror up to what I see our society has become. Qohen works for the faceless corporate entity, stuck in his little cubicle, surrounded by mindless drones and inadequate supervisors, just waiting for the medical profession to realise there is something wrong with him and send him home, a wish granted but at what cost? Surrounded by endless marketing and consumerism, false ideology and supermarket style psychotherapy it's no wonder Qohen is searching for some personal meaning as to what his life is about. Is he searching for some kind of God? That's for maybe a religious viewer to answer. What I saw was a man on the verge of burn out struggling to find a cure for his own mental health issues, a way out of the doldrums he has found himself in. I didn't see the ruined church that was his abode as a religious meaning but more of a ruin of what his life could have been. Qohen struggles to hold down relationships, as many of us do, and seeks his solace in online relationships, as we do with our social networking, but with online pornstar Bainsley, who offers him a brightness in his dark life but as with any online world, all is not as it appears and that false relationship ends, as do many of ours when we choose to escape from what is real. The online therapy is like a talking self help book and turns out to be as much of a lie as most of these programs are in our world and Qohen eventually breaks down. I guess I'm saying I saw a lot of my own reality within a great work of fiction.

First time screenplay writer, Pat Rushin, produced something wholly original and yet terribly familiar and, with Gilliam at the helm, they painted a masterpiece. The Zero Theorem was a beautiful film to look at. A futuristic version of our own world, full of bright colours and neons that were complimented by dark and harsh ruins. The modern technology and computer based number crunching wasn't a sea of servers but had an old school industrial feel that sort of shows that, no matter how we advance, we manage to always go full circle and in both set design and costume the film is full of as many contradictions as normal life contains. 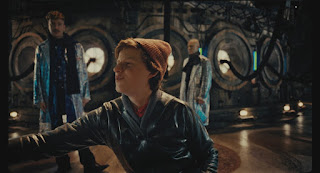 As with all Gilliam projects casting is key. The entire ensemble is perfect. From Matt Damon's camouflaged and mysterious Management to David Thewlis as the incredibly funny Joby, there is not a line that doesn't fit or a facial expression out of place. The doctors who examine Qohen are lifted straight from Gilliam's brain and if you had to guess the director from one solitary scene you would certainly come up with Gilliam when you see Qohen strapped to a chair being interrogated by Ben Whishaw, Sanjeev Baskhar and the always superb Peter Stormare. Rupert Friend, Lily Cole and Gwendaline Christie all have 'blink and you miss them' cameos and Tilda Swinton as the online Dr. Shrink-Rom is as watchable and brilliant as always. It is, however, the main three cast members that make The Zero Theorem as memorable as it is. Lucas Hedges as the young programmer Bob, who turns out to be management's very sick son, lights up the screen with youthful exuberance and reminds me of the love I have for Andrew Garfield in Parnassus. He plays off Christoph Waltz as Qohen Leth like a seasoned professional not a relative newcomer and, had it not been for how spellbinding I found Waltz, he would certainly have stolen the show for me. Melanie Thierry as Bainsley is beautiful in look and beautiful in soul. She manages to get underneath the hardened skin of Qohen and I felt genuine sadness when he decides he cannot spend any more time with her such was her portrayal. Christoph Waltz. Is there nothing this man can't do? He brightens up my life by just appearing on my screen and in Qohen he took a Gilliam character and truly ran with it producing something quite magical. His interactions with other cast members were as impressive as they were sad, showing he could finally allow care for another when Bainsley and Bob were in his life was beautiful to watch and when each left I was feeling the lump in my throat. His single minded mission to get his call, to find his meaning was a joy to watch and his insistence of using 'we' and 'us' instead of 'I' brought me back to the points I made at the top of this article about what we each take from this and I took Qohen as he was speaking for the masses not for himself so I didn't find the speech patterns as annoying as some.

I'd seen, upon its release, The Zero Theorem called Gilliam's return to form which I didn't understand as I'm not sure he's ever been off form. All right, Grimm wasn't great due mainly to the Weinstein's, but were there bad films I've somehow missed? Thinking about it now though I sort of see what they were getting at. Such was the message I got from the film I think I have to go all the way back to Brazil to have been so personally driven through my own thoughts by a Gilliam project and so yes, I suppose, with The Zero Theorem we see Gilliam returning to a movie that makes you really reflect on your own mortality and morality more than maybe a Munchausen or Parnassus did. This is very much what I love Terry Gilliam for. He takes simplicity and dresses it up in weirdness and makes you actually want to educate yourself, to learn not what the filmmakers are asking you to but about yourself and how you view the world. The Zero Theorem makes you sit up and take notice not of just the beauty playing out on the screen but what is buried deep within your very own soul.