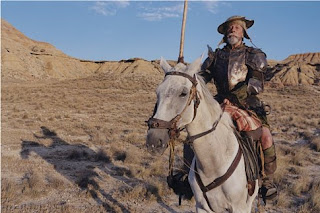 A few things have happened in recent months that have me sitting here in front of my computer screen an emotional wreck; the documentary I am yet to see about The Death of Superman Lives, the much wanted but sadly never made Tim Burton Superman film that would have starred Nicolas Cage as the Man of Steel, and the hugely encouraging news that Amazon have pumped some money into my favourite director of all time, Terry Gilliam, allowing for some of his non-Hollywood friendly visions to finally to make the small, if not big, screen, amongst which is The Man Who killed Don Quixote.

I have always loved Gilliam. From his small parts on screen in Monty Python films, the incredible artwork and animations that make a Python production stand out, to his films like Brazil, Twelve Monkeys, until recently my all time favourite film, Fear And Loathing In Las Vegas, which brought my love of Gilliam, Johnny Depp and fascination with Hunter S. Thompson together, Heath Ledger’s final screen outing in The Imaginarium of Doctor Parnassus, the wonderfully underrated Zero Theorem, and yes even Baron Munchausen, the film that destroyed whatever chance Gilliam had of gaining Hollywood money and earned him the unwarranted title of enfant terrible, was not the worst film ever made. One film though I always wanted to see, and Gilliam wanted to make for going on now nearly three decades, is The Man Who Killed Don Quixote. The fantastical tale of a dreamer with a love of over exaggeration accompanied through the seventeenth century by a modern day advertising executive is Terry Gilliam all over. If ever there was a project that was made for a film director this was the one, it’s the project that would have launched Terry Gilliam into the Hollywood Hall of Fame and left the director never needing to worry about a budget again. Quixote was to be his Star Wars, his Jaws, his Alien franchise but, instead, an already criminally under budget film was to end after only a few short weeks of production. This is where Keith Fulton and Louis Pepe’s documentary comes into play, and where these emotions (for me and I expect for Terry Gilliam as well) come from. 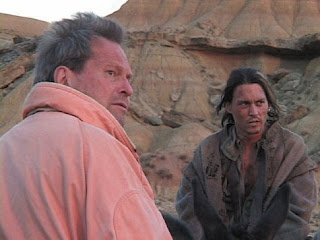 The exclusive touch that documentary film makers get on film sets is often overshadowed by tyrannical studio heads or ego driven directors and often watered down in the edit. The fact that Gilliam didn't do any of that, instead letting Fulton and Pepe make the film they wanted and then, along with Johnny Depp, doing the press tour on its release, shows how much they believed in what had been accomplished. I have always seen through the bullshit thrown around about Terry Gilliam and, with any film maker, I try and find positive things to say but, in the early 2000's, there wasn't the Internet as we know it today, where things can be claimed and counter-claimed in a millisecond, and so myths grow around certain things. Yes, Munchausen was a behind the scenes disaster and box office flop and, whilst I still have affection for the project, there is no point in me defending it but what comes across in La Mancha is that it wasn't a maverick director hellbent on destruction that was at fault and much of his crew and close team were made up of the people that worked on Munchausen therefore instantly dispelling the facade. What you saw was an incredible visionary with a fantastic idea go about his business in a creative way whilst facing a series of events that would completely destroy a lesser man. Budget halved after the main producer, it turned out, was more of a fantasist than Quixote himself, a cast that just couldn't get to Spain together for rehearsals, a location that had a NATO bombing exercise in progress that they had been told wouldn't be happening, and possibly the worst storm in history that had Gilliam quite literally facing off with God. Add to that the fact the main star fell ill which then affected the insurance of an already tightly wound project and this left Quixote abandoned and in the hands of the insurance company. It’s hard to see how anyone could continue but Gilliam is a special breed of man and started the legalities to buy back his own script almost immediately.

Lost in La Mancha gives you a glimpse of what should have been - the snippets of genius the film would have become. Depp's hate filled arrogant bastard of a marketing man arguing with a fish, Rochefort's perfect casting, and the Giants! Those Giants were incredible. The Man Who Killed Don Quixote will be back, albeit with a different cast and financial backers, but the vision will remain the same. It's hard to tell who this documentary is for, because I am such a Gilliam fan, but those who want to see behind headlines that follow Gilliam around might well enjoy Lost in La Mancha anyway and it is possibly the best trailer for the future project you'll ever see.

Plus Johnny Depp wrestles a fish.