Film - The Adventures of Baron Munchausen 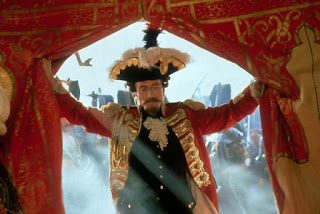 Susan Omand takes a look at The Adventures of Baron Munchausen because she wasn't brave enough to rewatch Brazil...

Is there a doctor in the fish?


I absolutely hated Brazil the first time I saw it, which must have been around 1988. And I mean physically hated, not even “meh, give it a miss” type apathy, I mean “ranting and railing against it” type hated it. I just really didn’t get it. It left me with that feeling of confusion you get when you fall asleep half way through a Hammer Horror film on the TV and wake up half way through a totally different Hammer Horror film, where the same actors are playing different characters, and you’re trying to piece together who they are and why someone you thought was dead isn’t. So I have actively avoided anything to do with Terry Gilliam ever since, until I was persuaded by our esteemed bossman to watch Zero Theorem last year and... I loved it. Adored it. Waxed lyrical about it to anyone that would listen as it was utterly brilliant surrealism and is now permanently ensconced in my top 5 films of all time. So, when I heard we were going to look at the work of Terry Gilliam, I found myself wondering what had changed in those 25ish years. Was it his directorial style that had found more logic, or my watching skills being more ready to accept that which I didn’t understand? I wasn’t quite brave enough (yet) to go back and tackle my Brazil nemesis, so I plumped for the next film Gilliam wrote and directed, The Adventures of Baron Munchausen.

The story, such as it is, is a fairly simple one. Honest. It opens in the late 18th century (on a Wednesday, which is important) in a theatre somewhere in Europe, where a small theatre company, Henry Salt and son...er...daughter (acclaimed as “A Good Night Out” by the Glasgow Herald apparently) are performing a play about the mythical Baron Munchausen and his fantastical adventures whilst, outside, the Turks are laying siege to the city and trying to invade and, backstage, the city official “the Right Ordinary Horatio Jackson” (Jonathan Pryce) exerts his authority by executing an army hero (a cameo by Sting and who wouldn’t want to be in the firing line for that one) for “demoralising the citizens who aren’t as good as he is”. Into the middle of this melee strides an old man in full military regalia who claims to be the real Baron Munchausen and complaining about the inaccuracies in the play. The “real” Baron starts to tell his story and the theatre morphs into the Turkish Sultan’s palace, where the Baron lays a wager that he can get a bottle of wine for the sultan from the cellars of the Venetian queen within the hour, or the sultan can chop off his head. Thus we are introduced to the Baron’s “team” - Berthold the world's fastest runner, Adolphus, a deadshot with superhuman eyesight, Gustavus, who has extraordinary hearing and amazing lung power and Albrecht, a fantastically strong man, all of whom bear a striking resemblance to members of the theatre company, but that is by the bye. Thanks to his team, the wine is obtained with seconds to spare and the wager is won.

The Baron’s story is interrupted by gunfire and the Baron decides to gather his team again and save the city to prove he is who he says and because he claims to be the “true cause of the war” with the Turks. Setting off in a hot air balloon, made from women’s underwear, and with young Sally Salt, the daughter of Henry Salt, in tow he heads for the moon through cotton wool clouds and a bad storm, cheating death on the way.

By this point I had given up trying to make any sense of it.

So back to the story... Robin Williams is the King of the moon and is angered that the Baron has a, shall we say, romantic past with the Queen and locks them in a cage, where they find Berthold, now an old man and unable to run. They make their escape, thanks to the head of the Queen, while her body is being “entertained” in bed by Robin...er...the King, and they fall into a volcano at Etna where they find Oliver Reed building a nuclear bomb and trying not to be distracted by a nearly naked Uma Thurman. Anyway, Oliver Reed, or rather, the god Vulcan, offers them tea which arrives in a tiny doll’s tea-set delivered by the strongman, Albrecht, in a maid’s uniform, trying to be dainty. Slightly more dressed Uma, the goddess Venus, seduces the Baron and distracts him, much to the annoyance of young Sally who is desperate for them to get back and save the city, so she tells Oliver Reed about them kissing, and he throws the Baron, Sally and Berthold and Albrecht all into a whirlpool that sucks them through the centre of the earth to the other side where they end up in the South Seas and get swallowed by a giant whale type creature. 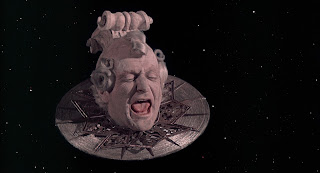 In the belly of the whale they find a lot of wrecked ships, including one where a card game was going on. Two of the players turn out to be Adolphus, wearing very thick glasses, and Gustavus, carrying an ear trumpet. The third is Death (who again gets cheated) and they make their escape again when the Baron’s horse, Bucephalus, breaks its way into the side of the ship from nowhere in particular. The Baron scatters some snuff and they are all sneezed out of the blowhole of the whale. So the band is now back together and they head for the shore where the Turk is still just about to invade the city. Each of the Baron’s men uses their special abilities to defeat the Turk and they are heralded as heroes and paraded shoulder high through the city, at which point the Baron is shot by the Right Ordinary Horatio Jackson and Death masquerades as a Doctor to take the life of the Baron away. The funeral procession is a sight to behold and, as he is lowered into the ground, the story cuts back to the theatre, where the Baron, alive and well, has been telling this tale to the assembled company. Again they are interrupted by His Right Ordinariness who tries to arrest the Baron for “spreading fanciful tales at a time when the city is in great danger” with the Turks at the gates of the city. The Baron demands that the gates of the city be opened and the crowds march with him, against Jackson and the soldiers, who cry treason. The gates are opened and... the Turks have indeed been vanquished, just like the Baron’s story said. At which point he rides off into the sunset on Bucephalus and disappears.

My first thought was how much like my favourite Tim Burton film Big Fish this film is, both in style and story, in that they are indeed fanciful tales which may or may not have a vestige of truth behind them somewhere in the past but embellished to make them a lot more exciting to the listeners. And the films are made the same way, with a dreamlike quality to the tales themselves which is echoed in part in the “real” parts of the stories. Indeed Burton and Gilliam are fairly similar as writers/directors too. Both are a very acquired taste, I must admit, and the films of them both are instantly recognisable in style and structure as being theirs. As directors, they also both are so well respected by the acting community, if not by the money men, that they can gather big names to be part of an ensemble cast very easily and often return to the same actors again and again. Neither of them are afraid to put creativity ahead of financial gain either in their film making, which is probably why they are not popular with the big studios because neither of them appear to like being reined in on a project just to make it commercially viable. They are artists in the medium of film – creating their own visions and to hell with the rest of the world, you either buy into it or you don’t.

To go back to my initial question though, was it his directorial style that had found more logic with Zero Theorem, which I adore, or my watching skills being more ready to accept that which I didn’t understand? A bit of both I think. There was a more linear story to Zero Theorem, with fewer unexplained leaps of faith than in the earlier films like Baron Munchausen and (I will assume) Brazil. But yes I will admit I am much more ready these days to take that leap of faith with him in the earlier films than I was in my logic bound teenage years. And I also understand the concept of appreciating the artistry without having to like the artist. So am I an out and out convert to Gilliam’s work? Not yet. But I will try more of it, I promise. Although Brazil may still be a hard nut to crack.