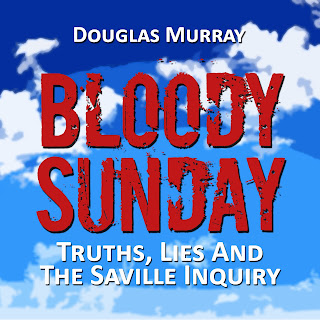 Steve Taylor-Bryant tackles an audio-book on a subject that is weighty, controversial and very close to him...


The atrocities of the Northern Ireland conflict are quite personal to me. I have good friends on both sides of the argument, I am an IRA bomb survivor and my Father served in Belfast during his time in the forces. However I have no voice in the debate, I do not know what's right and what is not and I don't start to presume I have any right to advise those who are involved.

By far the most famous (or infamous) event during the conflict was the day dubbed Bloody Sunday. On the 30th of January 1972, a civil rights demonstration in Londonderry, Northern Ireland ended with the shooting dead of 13 civilians by the British army who, four months later, were exonerated by the government. Eventually a public enquiry was called for and the findings of that inquiry led to Prime Minister David Cameron apologising for the actions of the soldiers in 1972. The Saville inquiry results are 10 volumes thick but, luckily for me, the guys at Spokenworld have recorded an audio version of Bloody Sunday: Truth, Lies and the Saville inquiry by Douglas Murray voiced by the wonderful Michael Fenton Stevens.

I'm not sure what Douglas Murray's politics are but he has certainly produced some opinions I will guarantee can split an audience. Murray's choice of language, using terrorist and murderer more often than perhaps is sensible, could be classed as inflammatory but in his defence he is as hard on Martin McGuiness and the IRA as he is on the soldiers, primarily Soldier F. He brings the families to the forefront and it is incredibly moving in parts.

As a brief summary of the Saville findings this is quite an essential project but parts just feel like a vanity exercise from a man desperate for the public spotlight. Murray's views and opinions are as fascinating in different ways as the stories of those involved. I would find the book quite hard to stomach I imagine but Fenton Stevens and the guys at Spokenworld manage to take an angry edge off the narrative and it comes across as a very good account of a dark day in our modern history.