Doctor Who - A New Showrunner and No New 2016 Series 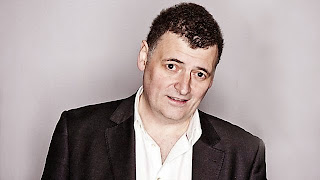 Steven Moffat has handed over the Doctor Who showrunner job to Chris Chibnall for Season 11 as the BBC announce a delay to airing Season 10...

Steven Moffat has announced that he will step down as Doctor Who showrunner, a post he has held since taking over from Russell T Davies in 2010, at the end of filming Season 10. The job will be taken up by Torchwood and Broadchurch writer Chris Chibnall, who has been a "long time fan of the show" and has, as we all know, written several episodes for previous series including the ...um... memorable Dinosaurs on a Spaceship.

BBC also took the opportunity to tell fans that there will be NO new Doctor Who series in 2016... wait what? Yes you read right. Season 10 of Doctor Who, the last under Moffat's reign, will NOT be shown until spring of 2017. When asked why this was the case, BBC1 controller Charlotte Moore said “I have decided to schedule Steven’s big finale series in Spring 2017 to bring the nation together for what will be a huge event on the channel. 2016 is spoilt with national moments including the Euros and Olympics and I want to hold something big back for 2017 - I promise it will be worth the wait!” Erm... yes, ok.

Moffat said of his decision to quit: “Feels odd to be talking about leaving when I’m just starting work on the scripts for season 10, but the fact is my timey-wimey is running out. While Chris is doing his last run of Broadchurch, I’ll be finishing up on the best job in the universe and keeping the TARDIS warm for him. It took a lot of gin and tonic to talk him into this, but I am beyond delighted that one of the true stars of British Television drama will be taking the Time Lord even further into the future. At the start of season 11, Chris Chibnall will become the new showrunner of Doctor Who. And I will be thrown in a skip.”

To quote our own bossman Steve on hearing the news, "Oh fuck off!"

However we have been "assured" that there WILL be a new Christmas Special this year and it will be under Moffatt's control so that will be something to look forward to.... won't it?