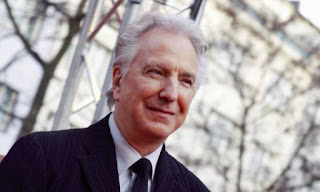 His voice was like a minor tremor,
Somewhere between a bass and tenor.
Strangulated vowels and enunciation,
Elongating words in fascination.
Rich with age and wisdom too,
Tonsils trembled when he spoke to you.
Warm like breath and thick like smoke,
Delivering a soliloquy or a sardonic joke.
A blanket for your ears, a unique drawl,
Allowing words to rise and then fall.
Unique in sound and modulation,
A voice that could emote sadness or elation.
One minute threatening, one minute smoothing,
One minute seductive, one minute schmoozing.
That voice, now silenced by the black disease,
No more to roll words round his tongue and tease.
Gone to rumble round another plane,
With Burton's, Welles's and O'Toole's again.
Unique to them, but ripe to emulate,
Nobody says "Potter!" like Severus Snape.
His voice, in legacy.
His voice, in sound.
His voice, unbroken.