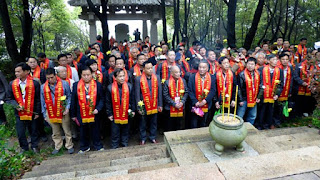 In the run up to the Chinese New Year, BBC Two is running a season of programmes on China...

With China never far from the headlines, from the long-awaited end of the ‘one child policy’ to the country’s economic turbulence, BBC Two takes a closer look at the world’s most populous country through a series of new programmes in 2016.

With both new drama and factual programmes, this season includes historical, contemporary, culinary, financial and social interpretations of a country we still know very little about.

BBC Two Controller Kim Shillinglaw of the season “These ambitious new programmes demonstrate BBC Two’s on-going commitment to bringing the world to our viewers. From an extraordinary look at one of the biggest annual movements of people on our planet - Chinese New Year - to the gritty and compelling new drama One Child and Robert Peston investigating China’s economic slowdown, this season will allow viewers to visit one of the most fascinating and powerful countries in the world and show a little-known nation in a whole new light.”

Chinese New Year: 2016 The Biggest Celebration on Earth: 3 hour-long programmes which promise to "submerge us into one of the most spectacular events on earth, getting to the heart of what it is to be Chinese in the 21st century." Every year, a sixth of the world’s population celebrate Chinese New Year. In 2016 the festival will spread across 15 days peaking on 8 February as China welcomes The Year Of The Monkey. It is the largest event on the planet and it sparks Chunyun, the biggest annual human migration, as over one billion Chinese travel home, emptying out China’s vast urban centres and bringing the Chinese countryside to life.

The Story of China - Written and presented by historian Michael Wood in 6 hour-long programmes, The Story of China explores the history of the world’s oldest continuous state, from the ancient past to the present day. Travelling across the country he explores the landscapes, peoples, stories and cultures that have helped create China’s distinctive character and genius over more than 4,000 years.

This World: Peston's Great Chinese Slump - Robert Peston travels to China to investigate the effects of the economic slowdown. After visiting areas in both north and south China to see the economics of the country for himself, he looks at the recent stock market crash and asks what the potential political consequences of low growth might be. In candid interviews with a leading Chinese policy-maker; the British Chancellor George Osborne; bankers and economists, he evaluates what China's slowdown means for the country itself, the world economy and for the UK, at a time when the British government seeks closer economic ties with China.

One Child - This three-part contemporary thriller is written by Bafta award-winning Guy Hibbert (Blood And Oil, Five Minutes Of Heaven) who wanted to look at the emotional effects of China’s 35 year-old one-child policy, which is coming to an end in March this year. It is directed by John Alexander (The 7.39, Exile, A Small Island). Mei, played by Katie Leung (Harry Potter, Run), is asked to return to her birthplace, Guangzhou, when her birth mother, Liu Ying desperately seeks her assistance in saving her son, Ajun. How far will Mei go to help the woman who gave her away and the brother she’s never met? One Child takes a new look at what it means to be family. Mardy Ma, Sebastian So, Linh Dan Pham, Donald Sumpter and Elizabeth Perkins also star in this tense and gripping drama.