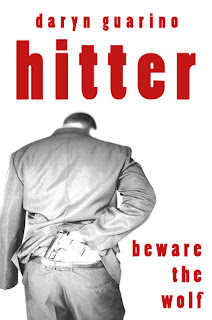 "Hi, my name is unimportant, but I hurt people for a living"

Meet the Hitter, a man who started out hurting people for money and ended up killing them. But life for a professional killer is nothing like the movies, it's bloody, brutal and violent, and most of all it takes its toll.

So step inside the mind of the Hitter, as we follow him from innocent child to cold hearted killer. Hold on tight it's going to be quite a ride.

The brief synopsis at the beginning of this article shows you one part of the book – its simplicity. It really is just the journey from abusive childhood to professional hitman, a well-worn path in both literature and screen and, if you are a writer wanting to make a mark, you have to bring something to that well journeyed trope and, my word, Daryn Guarino did just that. I try not to repeat words in reviews, certainly not in the same sentence and not unless I have to, so my apologies in advance for the amount of times the word ‘Brutal’ appears in this article.

Brutally simplistic, there is nothing fancy here. It is written like a memoir and doesn’t embellish anything that shouldn’t be there. It is a stripped down story that gives you the facts, the characters, and sets the mood without gloss or padding and, due to this, it reads at a rapid pace. That is, until you come across a couple of chapters that are so brutal the pace completely stops, as you have to put the book down and walk away from it for a while. I said there was no gloss, didn’t I? Well, some chapters prove that point very well but VERY brutally. The narration within the book points out that this lifestyle is not like Hollywood will tell you it is and, if that warning wasn’t enough, you come to the brutal violence contained within. The fights and abuse in the early stages which set the tone well are graphic, and you will wince, but not as much as with the first kill which removes any of the Hollywood doubt you may have still had. Then comes two attacks in particular that "brutal" is not quite a strong enough word for. The revenge attack on a rapist, Poppy, actually made me sick. I have never physically vomited from reading a book before and the description of the brutality had a real and lasting effect on me. The second attack later in the book on a paedophile teacher didn’t actually make me sick but I was incredibly uncomfortable at how I found myself cheering the attack.

Books are supposed to be read not lived but there was something in the simplicity and the brutality Guarino put on the page that changed me, that disgusted me, that had me trying to control my own inner wolf, that I cheered and that I despised.

You won’t ever read another book like this, so you really have to take this one in. However, I warn you it is not easy, it is far from pleasant and it is so very brutal. If you have the stomach, you will love it as I did, you will worry about the author’s mental health as I have, this is not the work of a ‘normal’ author and, if Guarino is not from this life and is instead an accountant or a vet, then his mind is broken.