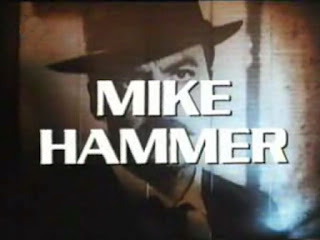 In a series of articles, Susan Omand and Steve Taylor-Bryant are going to remember the policemen, spies and criminal specialists that entertained them over the years. Today, Susan dons a fedora to remember Mickey Spillane's Mike Hammer...

My love of pulp detective novels goes way back. Way way back. Way way way... you get the idea. I’ve been reading things like Raymond Chandler, Ellery Queen and Dashiel Hammet since I could reach that shelf in the library and I devoured all of it. I also watched the classic detective films on TV – Humphrey Bogart as Sam Spade, Basil Rathbone’s Sherlock Holmes, the Charlie Chan films, but I never really expected to get the type of detective I was reading about in a TV series, until I fell in love with Stacy Keach’s hat at the age of 15.

Yeah I think it was the hat that did it. I’d read a lot of Mickey Spillane before I heard that they were going to do a new series based around his detective Mike Hammer and I had a fixed idea about what the characters were like, so it was with some trepidation that I tuned into the first episode.

I needn’t have worried, all the necessary bits were there; The gravelly noir-ish voiceover narrative, the trenchcoat, the run-down office, the physical thuggery. The character was also spot on for the books with a distinct lack of political correctness, a love of strong cigarettes and strong liquor and a confident masculinity that some of the more suave detectives of the time (like Crockett and Tubbs or Magnum PI) were definitely missing. If it had been shot in black and white you would have sworn it was the 1940’s apart from the setting which had been updated to 1980’s New York with all that that involved.

As well as Mike Hammer himself, there were other regular characters in the series, some of whom had been taken from the books, like his secretary Velda (Lindsey Bloom), and some of whom were added into the series to fill out the interaction more, so that Hammer was talking to actual people more than conducting the inner monologues that I loved in the books. The best of those was Captain Pat Chambers, played by Don Stroud. He was the NYPD contact that Mike Hammer played off, helping them out, because he could work outside the law a bit, just as much as Capt Chambers managed to keep him out of trouble. Because trouble was never far away in Mike Hammer. Yes it was the usual Private detective type stories week on week but the main difference with Hammer was that the bad guys pretty much always ended up dead before the end of the episode. None of this “let the law take its course” thing here that so many of the other detective shows of the time had, if you were a bad guy you got a fist in the face or met the ouchy end of Betsy, Mike Hammer’s Colt 45.

There were 24 episodes in the first batch of Mickey Spillane shows, and then Stacy Keach got a bit too into character and got arrested for cocaine possession. Having served his prison time, give the TV network its due, they tried to revive the series but the time had passed and it never took off again as much as it should. Stacy Keach is still playing to type though, currently playing main character Dwayne Pride’s (Scott Bakula) father Cassius, and currently in jail in NCIS New Orleans.