TV - Watching the Detectives: The Sculptress 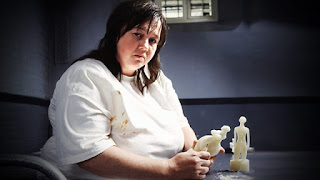 In a series of articles, Susan Omand and Steve Taylor-Bryant are going to remember the policemen, spies and criminal specialists that entertained them over the years. Today, Steve chips away at The Sculptress...

This edition of Watching the Detectives is brought to you by mid-1990's BBC drama. A series of Minette Walters books were adapted for the screen and amongst them was the incredible story of The Sculptress.

Olive Martin - a 28-year-old, morbidly obese woman - was imprisoned for life after police found her cradling the shattered bodies of her mother and sister, having previously dismembered them and re-arranged their limbs into abstract shapes on the floor, a crime for which she was nicknamed 'the Sculptress'. Troubled journalist Rosalind Leigh, under pressure from her publisher to produce new material, reluctantly agrees to write a book about Olive and - whilst conducting interviews with the prisoner - gradually comes to believe that she is concealing something, maybe even her own innocence. In her quest to discover the truth Rosalind enlists the help of Hal Hawksley. He is an ex-policeman who investigated the case originally and is still haunted by some of its aspects.

This was a superb book, it won awards and rightly so, but books don't always transfer to screen that well. This is especially true of small screen adaptations where it takes on an episodic form and so sometimes loses something in the week long break. I remember watching the start of the show in the 90's and never getting to its conclusion, due to work commitments coinciding with the middle of its run. Luckily all the Minette Walters dramas are handily available as a DVD box set so I have finally got to see it through to the end.

Firstly you notice the casting is flawless. Whilst its general look is very 'of its era' the performances are timeless. Caroline Goodall as journalist author Rosalind Leigh plays the grief of her daughter's death well whilst still keeping the viewer excited about the visits with Olive Martin and how the tale will end. Goodall's screen chemistry with Christopher Fulford as Hal Hawksey is spot on and Fulford himself deserves plaudits for his showing as the detective forced out of his job by the scenes he discovered when he was called to the Martin home. However it is Pauline Quirke as Olive Martin that will never leave you once you've seen it. Stunning doesn't begin to describe the twisted way Quirke portrays the killer and the way her facial expressions begin to sow seeds of doubt about her guilt but also her innocence and makes the story virtually impossible to predict before the end. I only knew Quirke from the sitcom Birds of a Feather, so to see this comedian all of a sudden playing a psychotic murderer and her mind games with Leigh and with the prison priest, Dermot Crowley's superb Father Julian, was a shock to the system even two decades later when I sort of knew what to expect.

Storywise it's almost flawless. The murder of a mother and daughter and various twists as to who commits the atrocity keep the viewer guessing right past the finale of the tale as I'm telling you now I'm still in two minds. Morbid obesity has been used in drama before but I've often been left feeling it's been irrelevant. Yes someone of that weight could be the victim of bullying or the perpetrator but so could someone with a mental health issue or a disability. A lot of time television puts an overweight character front and centre as nothing more than the butt of a joke but in The Sculptress it actually became essential to the plot. Olive Martin confessed because she was hungry and Detective Hawksey had promised her dinner when the interview was over. It's a simple plot twist when you think about it but I finished the show stunned at how smart a piece of writing that actually was.

The only issue I had with the entire story was the criminal element of Stewart Hayes (Ian Reddington) trying to force the retired detective Hawksey out of his restaurant as he needed the land he was buying with the stolen money from Olive Martin's fathers will which I felt, whilst played out nicely by all concerned, was a tad coincidental and seemed to be forced in. Other than that I can't fault The Sculptress and wish the BBC made more drama like this.