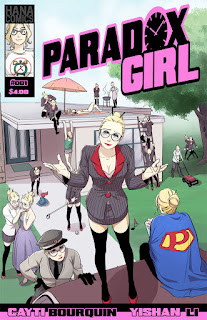 The Defective Inspector starts a new folder in his Case Files thanks to True Believers Comic Festival as he reads the comic Paradox Girl...

When searching around the True Believers comic festival I met up with two fine upstanding individuals called Cayti Bourquin and Yashan Li. These fine upstanding citizens of the indie comic book world work alongside Hana Comics and produced a piece called Paradox Girl. As a man who greatly approves of anything to do with timelines and royally screwing with them I took up the chance to look at the first issue fresh off the presses.

So what IS Paradox Girl? Well trying to explain a paradox is by very nature complicated but the better way to explain this is using ol’ fashion ‘Back to the Future’ terminology, prep the chalk board. Remember when Doc Brown creates an alternative timeline and it changes the future? Well… Imagine if it didn’t change the future… But at the same time did. Where someone would pop in and out of time and return only to become her own self-fulfilling prophecy? Using that very unusual arrangement to fight giant lizards or steal from herself. That is the nature of Paradox Girl.

While that sounds complicated in the written word it is far better translated in comic form. Using the traditional panel setup there are little lines to guide you through the time jumps allowing things to interconnect the jumps between panels. Sometimes however these connections are well balanced without need for guidance! Waffos for example! They are a well-established framing mechanism for Paradox Girl and now have become something I want to try! But there is more, in issue #001 a fellow by the name of Axiom Man appears who does seem to add a level of stability to the unusual nature of Paradox Girl, often knowing what’s going to happen while it happens. I mean…That does make sense since axiom quiet literally means ‘well-established/without need of questioning’. While the powers are very interesting there does appear to be more…

Unsurprisingly someone with powers to change time and create a paradox is somewhat… Anxious. In fact the term “Neurotic moth” is used to describe our slightly unhinged protagonist. While only reading the first issue I get a taste of great complexity to the character without being given too much. This is great for character development as I have a mixed feeling of wanting more while also getting enough to keep my merciless curiosity at bay. But the personality remains cheeky and playful and not entirely serious. There is a dangerous trap to fall into when making a character that they become this grand overzealous hero but not here, oh no, she is as flawed as the rest of us and that is comforting and relatable.

The artwork itself was crisp and clean which is greatly appreciated in a comic which could have gotten terrifyingly complicated without a good hand to hold me. What I did enjoy is despite the fact Paradox Girl is an established person she doesn’t appear to have an artistic restriction, well apart from when you travel through time eating banana toaster waffles called “Waffos”. But the front cover shows the dynamic versatility which can come from a character like this, there is so much artistic freedom I look forward to what could happen next because literally anything can.

I’ve got a hard copy of issue #001 and constantly tempting myself with the second. Cayti and Yishan have created a realistically strong while some how fragile female protagonist, as if she had the powers of paradox creation or something… I anticipate good thing for this unique, dynamic and playful comic with one hell of a future/past ahead of it. And Waffos… I REALLY want more Waffos. In fact here is a link, see for yourself the glorious Waffo eating Paradox Girl.


Images from paradoxgirl.com
Email ThisBlogThis!Share to TwitterShare to Facebook