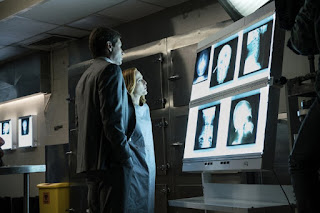 After not really enjoying the show's comeback episode, Steve Taylor-Bryant investigates the second as he watches the Founder’s Mutation…

After another Fox Mulder voiceover version of ‘previously on’ that contains information about Mulder and Scully’s son, William, we meet an unwell scientist, Dr. Sanjay (Christopher Logan) who tells his colleague he is fine and attends a meeting at his laboratory where the head of his department tells the assembled scientists that the founder, Augustus Goldman (Doug Savant) a mysterious recluse, is not happy with the results of their research and wants to start again. Whilst the scientists are all arguing and obviously not happy, Sanjay starts to hear a high frequency noise in his head as birds crowd the field below. He runs from the room to a sealed chamber containing secure servers and, whilst his colleagues desperately try to gain access, Sanjay takes his own life by pushing a letter opener through his ear and into his brain.

After the opening titles Mulder (David Duchovny) and Scully (Gillian Anderson) are in the server room investigating but aren’t allowed access to anything, including the elusive Dr. Goodman, as the Department of Defence, who are funding the research, won’t allow them anything. However, Mulder has pocketed Sanjay’s mobile phone and discovers a regular contact who he goes to meet. The contact, Gupta (Vik Sahay) mistakes Mulder for a sex client as it turns out Sanjay had been a regular visitor of his. Gupta explains that Sanjay had become quite withdrawn and had told him that his children were dying. Sanjay, a single man, hadn’t had evidence of children in his home but Gupta lets Mulder know he had a second apartment. Scully meanwhile is doing Sanjay’s autopsy when she realises that, right before he died, he wrote ‘Founder’s Mutation’ on his palm. Mulder and Scully go to Sanjay’s second home and discover clinical photographs of deformed children on his wall. Mulder starts to hear a high pitched frequency and collapses on the floor when the police and the DoD sit with Mulder and Scully in Skinner’s office, explaining that Mulder didn’t have the clearance to read Sanjay’s files therefore they are off the case before threatening Mulder if he ever leaked anything he read. When the DoD leave, Skinner (Mitch Pileggi) asks Mulder and Scully if the DoD might be experimenting on children and buys them some time to keep investigating. Mulder and Scully watch some CCTV footage and Mulder explains to Scully about the high pitched noise he heard and told him to ‘find her’.

Scully thinks they can get an audience with Dr. Goldman via her old hospital where he was a financial donor. Whilst the head of the hospital makes a call, Mulder and Scully are confronted by a patient, Agnes (Kasey Rohl), who doesn’t want to give up her baby to the hospital despite the fact she thinks there is something wrong with it. Mulder begins to think that the patient’s babies are being given to Dr. Goldman for experimental purposes. All the talk of babies brings a sadness to the agents as they talk about their own son, William (Played throughout the dream sequences to come by the Longworth children Hannah, Aiden and Rowan) with Scully dreaming of William’s first day at school and his first broken arm in an accident, and his face mutating as he looks in the mirror. Mulder and Scully finally get their meeting with Dr. Goodman and meet the children he says his foundation are helping, who all are suffering from various syndromes that deform their bodies in some way. They talk to one child, Adam (Jaiven Natt) who has been in a sealed room since birth. Dr. Goldman explains it is because of environmental factors. Mulder’s phone goes and the police inform him that Agnes has been killed in a car accident but her baby is missing which, during the autopsy, Scully discovers has been surgically removed.

Mulder and Scully are talking about a genetic alien/human hybrid as the next step in evolution and find that Dr. Goldman had a wife, Cynthia (Alison Wandzura), who is locked in a mental institution after being found guilty of killing her baby despite a body never being discovered. Mulder and Scully visit Cynthia who explains her first child, Molly, fell in the pool when she was two. Cynthia had dived in to save her despite her being underwater for ten minutes. Molly was smiling and breathing the water. When Cynthia fell pregnant again she fled knowing that Dr. Goldman would just experiment on the foetus. Cynthia crashed the car and, after crawling out, sliced open her stomach and let her baby, basically, run away which explains why there was never a body. Mulder spots a janitor and finally clicks that the missing son, now a lot older, was somehow involved. They find out he is called Kyle and lives in the country with his adoptive mother, who is angry at having the F.B.I visit and refuses to let them in. Mulder suddenly collapses again with the high frequency noise and birds start flocking to his location. Scully runs to a barn and finds Kyle (Jonathan Whitesell) who stops the telepathic noise and leaves with Mulder and Scully explaining he can’t control his power and was just protecting his mum. He goes on that he didn’t mean to kill Sanjay as the scientist was helping find his sister, Molly. 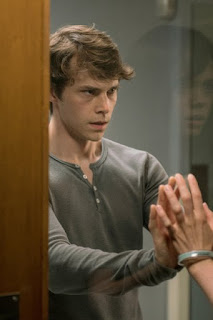 Mulder and Scully take Kyle to Dr. Goldman who takes some blood to test and agrees to let Kyle meet Molly but Kyle knows he’s been duped and the girl they see is not his sister and so searches the facility until he finds her. Dr. Goodman doesn’t want to let them out so they telepathically throw Mulder and Scully up the corridor and Molly (Megan Peta Hill) uses her and her brother’s power to make Dr. Goldman agonisingly die. The DoD arrive and take over the investigation with Kyle and Molly missing but Mulder has pocketed the vial containing Kyle’s blood for future testing by Scully. Another dream sequence ends the episode with Mulder and William watching monkeys on television, and then playing with rockets and William wishing to go to space, before Mulder is confronted by William being abducted by aliens just as Samantha had all those years ago. In reality Mulder is sitting alone in his kitchen with a baby photo of William.

Well that was better! This episode should have been the relaunch. A classic strange case with some excellent conspiracy threads and Mulder once again butting heads with a government agency. This is what The X-Files always did so well and after about ten minutes you forget Duchovny and Anderson have aged and it’s like being back in the 1990’s watching the show at its prime. Duchovny and Anderson had all the chemistry that was lacking last week and were playing off each other, conspiracy versus science, just like they always did. The story was excellent, very gripping, and emotionally worthwhile as any good story that involves children should be, and Skinner was back on form as the Deputy Director. In fact the only way to tell this episode is something new and not from the classic era was Mulder’s mention of Edward Snowden in retaliation for the DoD threat. Take away that modern nugget and this was The X-Files from any of the good years. The use of William lays the foundations for an obvious storyline that is to come and Mulder and Scully have some heartbreak ahead of them I’m sure. Brilliant. More like this please.