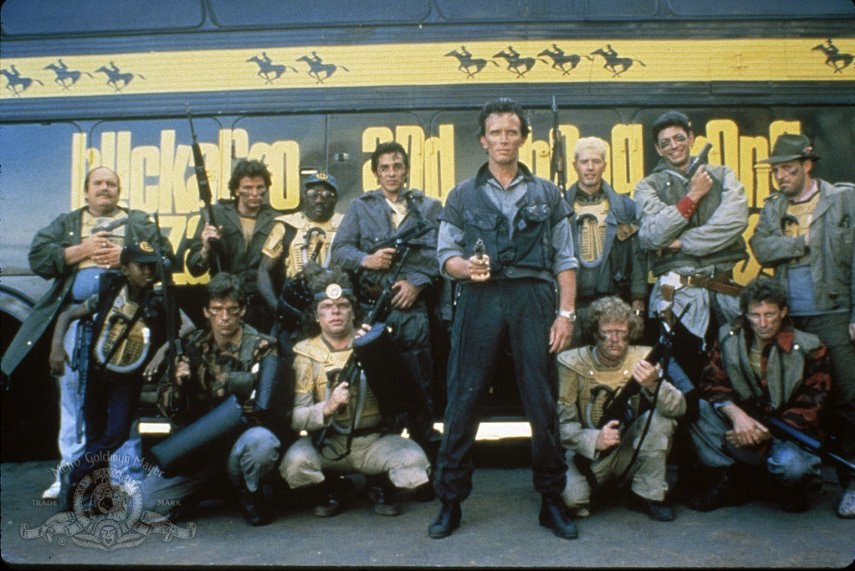 Our small band of Gunter's here in the /G-f universe are reviewing every film mentioned in Ernest Cline's Ready Player One. This week Nate McKenzie with his thoughts on The Adventures of Buckaroo Banzai Across the 8th Dimension...


As children, we grow up playing at many fantasies: the samurai, the doctor, the famous musician, the hero. In film, we get to visualise these fantasies as they come to life in all their technicolour glory.

One movie, though, encompasses all of those would-be characteristics and melds them together into one enviable protagonist - Buckaroo Banzai.

After Buckaroo and fellow scientist, Professor Hikita, successfully travel through a mountain into the 8th Dimension (via jet-car), the news travels fast. While watching a press conference detailing the event, Prof. Hikita's former associate Professor Emilio Lazardo (John Lithgow) escapes from the confines of a mental hospital and makes his way to New Jersey, where there exists his former company of employ, Yoyodyne Propulsion Systems. Eventually, Buckaroo and pals discover that the employees of Yoyodyne are Red Lectroids, evil aliens from the 8th Dimension who are determined to destroy Planet 10 and its inhabitants, the Black Lectroids. Buckaroo and the Cavaliers are thrust into the center of the conflict and forced to intervene.

Then... the story gets weird, though I won't spoil the rest for you (because I fully expect everyone to watch it after this glowing review).

There is no movie more quintessentially 1980's than The Adventures of Buckaroo Banzai Across the 8th Dimension.

If you could cut and paste together some of the most famous films and television shows from the decade-that-style-forgot you would come close to the amalgamation that is Buckaroo Banzai. The titular character and his crew, the Hong Kong Cavaliers, dress like extras from a Miami Vice episode. The music, as well, is distinctly 80's, heavy on the synthesiser and the Cavaliers even feature a guy playing a double saxophone. Facets from multiple genres are present and prevalent - jap-anime, sci-fi, old kung-fu flicks, and 80's action movies. Even the alien costumes are as terrifically bad as any that the Power Rangers might have defeated. The vector CGI can only be favourably compared to that of the infamous Atari disaster, E.T. The Extra-Terrestrial. There's even a Jeff Goldblum!

However, Buckaroo and pals deserve a much more auspicious lasting mythology than being buried in a landfill in the middle of New Mexico.

The movie has inspired a plethora of easter eggs, subtle nods, and even outright tributes in film and television since its release. Least veiled of these treatments is the direct - shall we say - "borrowing" of the design and utility of the 'oscillating overthruster' (which transports Buckaroo and his jet-car into the 8th Dimension) which appears in a future sci-fi film, and is known by a name that all of geekdom is familiar with: the flux capacitor. Yes, Marty McFly and Doc Brown owe their time-travel success to a rock-star neurosurgeon particle physicist who fights aliens and woos beautiful blonde pixie-cut women like Penny Priddy (played by the blindingly gorgeous Ellen Barkin).

Truly, many later sci-fi action-adventures owe no less than a tip of the cap to Buckaroo Banzai. In the same vain, the Buckaroo storyline plays off of Orson Welles' 'War of the Worlds' 1938 radio broadcast. As a fan of that radio recording (if you've never listened, I urge you to do so) I very much appreciate and enjoy the homage.

The Adventures of Buckaroo Banzai has many flaws. The acting is over the top and I already mentioned the low-quality computer simulated graphics. But if ever there was a film from the 80's that deserved cult praise and a devotional following, Buckaroo is a worthy choice. Kevin Smith himself counts The Adventures of Buckaroo Banzai as a personal favourite and extremely influential in his film career.

For our mini re-Boot day here at /G-f I wrote an article called 99 Problems about films that really shouldn't be remade. However, The Adventures of Buckaroo Banzai is the one movie that deserves a remake. Lesser known but profound in the annals of those who are familiar with it, Buckaroo Banzai is the very definition of a cult-classic and one of the best films mentioned in Ready Player One.