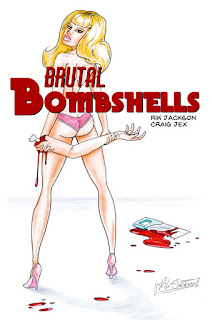 Susan Omand drops a few bombshells of her own as she reads Brutal Bombshells from Rik (Silent P) Jackson and Craig Jex...

Brutal Bombshells collects six stories of murder and misadventure. Femme fatales, dangerous ladies and psycho bitches will stalk, stab and gouge their way through the pages of the debut horror comic from Rik Jackson and Craig Jex.

With Twilight Zone-esque narrative and some outrageously nasty outcomes, will these Brutal Bombshells kill or be killed???

When I read the synopsis above and saw "Twilight Zone-esque narrative" and "some outrageously nasty outcomes," I was really looking forward to some B-movie style madness in this comic, with surreal situations and good gory horror or, at the very least, something so bad it’s funny.

The cover (above) should have warned me but, as I do with dodgy artwork, I gave it the benefit of the doubt because, to use the old cliché, you should never judge a book by its cover and maybe the stories inside would be stunning. Unfortunately Rik also seems to be very fond of old clichés as this collection of six stories brought nothing new to the table, either in terms of horror or comedy value. Indeed the funniest thing in the comic is the disclaimer on the front page and, had that style and level of humour been maintained, the iffy artwork throughout could have been overlooked and it could have been an enjoyable, if light, read. As it was, the stories themselves were as puerile and ho-hum as the artwork. The plot of the first one for example, entitled Sweaty Suzy (which you can read for yourself here), was a rip off of a Robbie Williams video as a badly proportioned, scantily clad female gets trapped in a sauna and rips off all her clothes and then her skin. And then... well, that’s it. That was the full story. Not to put too fine a point on it, I’ve seen porn films with more plot (and better boobs).

Daunted but unfazed I started on the next, Dinner Date Debbie, and then the next, Boob Job Barbara. I think you can see a pattern forming here as I plodded through all six “stories” of said Bombshell females ineffectually waving severed body parts around as I waited for the shock value or, at the very least, a smile to form. I know what you’re going to say, I was offended by the nudity and/or the level of horror, or I didn’t “get” the humour. On the contrary, I was not offended by any of it. I was just bored.

This could have been really good and I wasn’t expecting miracles. I knew it wouldn’t have the level of horror that Alterna Comics are so good at. I knew it wouldn’t have the fantastic artwork and storyline of Death Sentence and it couldn’t possibly have the clever humour of the Madius crew but I was expecting something that at least held my interest over 32 pages. It could have had the subtlety and fun of the Twilight Zone, as it said it would, or at the very least it could have been Viz level satire of the B-Movies of old. There was no substance to it at all, nor nearly enough style to say it was was style over substance. If the plot and horror/humour in the stories were fleshed out a lot more (pun intended) and the writing style improved upon there may be a market for this but, as a debut comic, it should have remained on the drawing board as a private project for a lot longer.