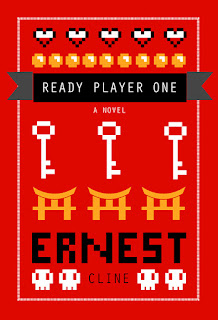 David Ames thoughts on the book that has spawned our Project RPO challenge, Ready Player One by Ernest Cline…


Cracking the cover of Ernest Cline’s pop-culture opus Ready Player One was at once immersive, engaging and terribly entertaining. I can’t even begin to pore over the details which this book has encompassed and so, to save everyone a heaping bowl of what-the-fuck-is-he-talking-about, let me just say that Ready Player One may just be the greatest book that I have ever had the pleasure of reading…multiple times.

The novel follows a young Wade Watts as he navigates a world obsessed with 80’s culture and powered by an online virtual world known as Oasis. The Earth as we know it has crumbled and, in a very prophetic and dare I say political lean on the part of Cline, it has suffered through a global energy and pollution crisis. A majority of the population now runs to Oasis to escape their horrid everyday lives and the world, created by computer genius and 80’s aficionado James Halliday, gives them any sort of escape they wish. I have always imagined it was like World of Warcraft, only interesting.

Halliday has died and in the wake of his death, has left his amassed billions and control of his company up for grabs. The only catch is that to earn the money and the power, one must navigate through a series of Pop-culture riddles and clues and discover the path to Halliday’s famed Easter Egg (a hidden object or place in a movie or videogame). Solving the riddles and obtaining the egg is the only way to receive Halliday’s prize.

Five years after the contest begins, Wade accidentally stumbles into the first clue and, from there, the story unfolds into a race against time to stop a multi-national corporation hell-bent on destroying the Oasis as humanity knows it. This company, IOI, will stop at nothing to gain control of the multi-billion dollar company including blackmail and even murder.

This explanation of the book is far less than I could write. In fact, a treatise from my hand would probably stretch scores of pages detailing the brilliance of Cline’s dialogue and world building, not to mention the hilarious and ever-present winks at geek culture, primarily focused in the 1980’s. I laughed out loud multiple times, employing my knowledge of such topics alongside Wade’s and learning new and interesting trivia I had only an inkling of before. The scene when Wade recites dialogue from Monty Python and the Holy Grail is alone enough to cause my mind to explode.

Cline does a brilliant job of blending what is an obvious love of 80’s music, movies, and especially videogames into a moving piece that both excites and elicits thought about the possible future of our world. Reading Ready Player One is like combining Tron, 1984, The Perks of Being a Wallflower, Avatar (but good), and Blade Runner into a videogame and then fighting through each level.

The book is a page turner and even the second and third time through I couldn’t put it down. It has the addictive quality that old 80’s side-scrolling videogames possess. You HAVE to finish it when you start…there is no other option. I found myself checking the clock all the time, trying for just a few more minutes in that world.

That is the best way I can sum up Ernest Cline’s first outing. You don’t need to sleep. Instead, you need to sit back into your haptic chair, relax to boss 80’s mixtape, and dive into Ready Player One.

You will lose yourself. That is a promise.