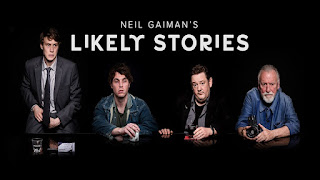 
Likely Stories, a new four-part adaptation for Sky Arts produced by Sid Gentle Films Ltd., is a collection of extraordinary short stories from the pen of Neil Gaiman. The series is directed by Iain Forsyth and Jane Pollard, the duo responsible for the multi award winning critically acclaimed Nick Cave film 20,000 Days on Earth.

Neil Gaiman said: “Short stories traditionally do not get a lot of love from television. I'm really excited to see what the team are going to do and make with Likely Stories - they've given it real thought and it feels like it's going to be something very, very special.”

Set in London, these four 30-minute short stories will be characteristically dark and strange whilst also drawing on the deftly crafted characters’ human warmth and wit. Centring on the act of storytelling, viewers will be drawn into Neil’s intricately crafted world that moves seamlessly between reality and fantasy. Neil himself will appear in each film in an unusual way, with subtle nods to his wider work that Gaiman super-fans will be able to spot.

Phil Edgar-Jones, Director of Sky Arts, commented: “I’ve long admired the work of Neil Gaiman. He is a genius storyteller and an exceptional talent, and I’m thrilled to be bringing these adaptations of his work to Sky Arts. Under the British directorial powerhouse of Iain Forsyth and Jane Pollard, Likely Stories is, in true Gaiman style, brilliantly bizarre and unexpected.”

Sally Woodward Gentle, executive producer and CEO of Sid Gentle Films, added: “Likely Stories is like nothing else on TV, these utterly unique stories demand visual adaptations and we are delighted to be bringing them to Sky Arts. Each film, although self-contained, explores common themes of human consumption, destructive obsession and psychological cannibalism – all told with great humour, humanity and a completely astounding musical score.”