TV - Where Have Duchovny & Anderson Been?

Steve Taylor-Bryant has been bored waiting for the new X-Files (tonight at 9pm on Channel 5) and so raided his DVD collection to look at what the stars have been up to since the last episode all those years ago...


You'll get various articles about The X-Files now due to the incredible excitement most of us have for its return. I have my own articles in the archive (HERE), looking at each season and my favourite episodes, and I'll certainly bombard you with my thoughts as this new season unfolds but what of the two main stars? What have they been up to in this massive chasm of time since the last episodic version of F.B.I show? What has tickled my fancy that contains either David Duchovny or Gillian Anderson? I know you're waiting with 'bated breath so I won't keep you in suspense any longer. My top 3 for each star during The X-Files exile... The Last King of Scotland

This film was epic. Brilliantly written, expertly cast and rightly won Oscars and Golden Globes and many BAFTA nods and yet it doesn't seem to hang around in the great film conversations any more for some reason. Whilst Forrest Whitaker takes all the plaudits, and deservedly so, the film is what it is due to the entire cast as an ensemble with Gillian Anderson and James McAvoy deserving mention in the same breath as the lead. If you haven't seen The Last King of Scotland yet do it now! If you have seen it let's talk about it more as I feel it's becoming a lost treasure.

When talking about brilliant films it's very rare you will include a revenge thriller starring Danny Dyer. Don't get me wrong, I'm quite the fan of Mr. Dyer and he is a solid actor who does exactly what it says on the tin. Straightheads would have been the typical budget bin DVD if cast badly but having Anderson in the main role of Alice, victim turned revenge perpetrator, added a level of class that takes a great premise and grabs an audience the film wouldn't usually have got. That's down to the Anderson factor.

The Fall was a show that seemed to come out of nowhere. It launched with very little fanfare and not the sort of marketing campaign we are used to in modern times, considering the cast, and blew me away. The story was a simple old trope of detective tracking killer but the performances of Jamie Dornan and Gillian Anderson launched it into the quality realm with ease. Surprisingly it was nominated for many awards but won very little. You judges are a fickle bunch when you allow The Only Way is Essex to win a BAFTA and not counter that evil with a win for something this good.
Special mention for Hannibal, although the first half of the last series bored me to the point where it getting cancelled didn't bother me, Bleak House, which is not my kind of thing at all but was highly watchable, and Johnny English: Reborn which was hilarious and Anderson was superb. 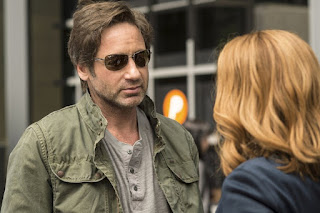 I'm quite the sucker for television show based dramas and comedies. Network, Studio 60 on the Sunset Strip and The Newsroom are often mentioned by people but The TV Set is incredible. Duchovny as Mike Klein is just the right amount of grief stricken and mad as a writer trying to get a show off the ground after his brother commits suicide who comes up against a network that demands so many changes to his original vision. With Sigourney Weaver as watchable as ever, this film needs more love.

Things We Lost in the Fire

An emotional film that starts with a funeral and flashes back over the main cast's lives and how they intertwined with extraordinary performances from Duchovny and Halle Berry who more than hold their own in a film starring Benicio Del Torre.

Hooked from the first episode! The period, the music, the drug culture, Duchovny as an ex military man now detective at the start of Charles Manson and his cult? What's not to love?

Special mention for Californication which was brilliant at the beginning but towards the end felt like it had run out of ideas, The Secret that was weird and had the potential to be very good with a tweak in the writing and maybe some more time as it felt rushed, and Louder Than Words that was beautiful but didn't quite tug the heartstrings like maybe it could have.

Is The X-Files on yet?