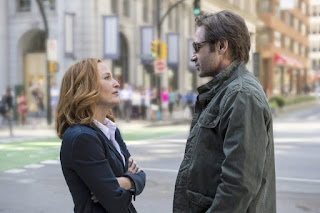 Steve Taylor-Bryant gets on the case with Mulder and Scully as he hides in the shadows and watches the newest instalment of The X-Files. With massive spoilers his thoughts on My Struggle...


Mulder’s voice is explaining about Samantha, his sister, his lifelong search for the truth, his involvement with the F.B.I, The X-Files as a paranormal unit, his personal obsession. He goes into the history of U.F.O sightings and explains that people nowadays just laugh and only Roswell lives in the memory. He asks the questions we should all be considering…

Are they only a hoax?

Are we truly alone?

Are we being lied to?

And then begins the oh so classical opening credits, not touched over time, with Mark Snow’s haunting soundtrack and The X-Files is back on television. After the credits, we see an alien crash and a man of science, a doctor, being taken to the site by men in black suits and soldiers before returning to the present day where Assistant Director Skinner (Mitch Pileggi) is trying to locate Mulder (David Duchovny) via Dana Scully (Gillian Anderson) as he wants him to meet Republican loud mouth Tad O ‘Malley (Todd McHale). Scully sets up a meeting and attends herself and it’s the first time she has seen Mulder in a while. O ‘Malley is paranoid but is a great believer in U.F.O phenomenon and educated in the field as he proves to Mulder in his bullet proof limousine. He wants to metaphorically blow up the conspiracy in government, big business and within the intelligence community and introduces the pair to Sveta (Annet Mahendru) who they do not recognise but had interviewed as a child after she reported being abducted by aliens on multiple occasions. As she grew older and they impregnated her, they would take the unborn foetus from her and other abductees, harvesting the babies for some reason.

Back in the past and the soldiers, men in black and the doctor (Giacomo Baessato) find an injured alien crawling from the wreckage and shoot it, much to the disgust of the doctor.

Scully does tests on Sveta to see if she does indeed have alien DNA and has doubts about Sveta’s supposed abilities. Sveta talks about personal issues that brought an end to Scully and Mulder’s relationship and includes information only they knew and discusses her abductions and recognises that Sully is also a victim. O ‘Malley takes Mulder to a secret location that contains a Faraday Cage. Within the cage Mulder meets a scientist and sees first hand an alien craft. The scientist goes on to explain that for 70 years the government have kept the craft's science a secret as it runs on free energy and contains a gravity warp drive. They had to keep the propulsion system a secret so that people would continue to buy petroleum.

Back in the past the doctor takes the dead alien body wrapped in a sheet and explains to the man in black that he is a man of science and much can still be learned.

O ‘Malley visits Scully at the hospital she works at and marvels at the good work she is doing for children born with unexplainable deformities, about missing The X-Files and Mulder. Meanwhile Mulder is alone with Sveta and discovers the effect everything has had on her life and how she fears it will only get worse. She believes that it wasn’t aliens who were harvesting the babies but men who wanted to carry out experiments on them, which leads Mulder to think the whole alien conspiracy he has worked on has been a lie to hide the real truth and that Sveta is the key. Mulder goes to the F.B.I building and meets with Skinner in Mulder’s old office (complete with pencils in the ceiling) but is angry when all his files are missing. Skinner doesn’t know where they have gone but says he has always been looking out for Mulder which is why he set up the O ‘Malley meeting in the first place, and wished they still worked together. Scully wants to retest Sveta and her own DNA, as she isn’t happy with the first set of results, whilst O ‘Malley tries to charm her by highlighting her great work on his web show. Mulder meets the Old Man (Rance Howard) who, it turns out, was the doctor from the flashbacks. Mulder admits he has been hoodwinked by the government and that he believes the alien tech will be used by the mysterious elite against their own people. Old Man admits that Mulder is very close to the truth.

Back at Sveta’s house Scully, who has tried to leave after losing her temper with Mulder who she is very worried about, Sveta and O ‘Malley all sit and listen as Mulder explains this is a conspiracy of man, that weather wars caused by technology, actual wars and things in government like consumerism and The Patriot Act were all put in place to control the world, whilst these elite men will use the alien tech at their disposal to conquer first America and then the globe as they seek dominance. Scully believes that they are talking irresponsibly and verging on treason and announces that Sveta has normal DNA and there is nothing alien about her. Soldiers invade the Faraday Cage, kill the scientists and blow up the craft, while Sveta comes out publicly and states she was paid to mislead people by O ‘Malley, who takes down his website and disappears. Mulder meets Scully in a car park and they are talking about the sixth extinction when Scully admits that she retested both blood samples and that she and Sveta do have modified genetics and wants this conspiracy stopped. Skinner sends an urgent text to the pair.

Sveta’s car breaks down in the middle of nowhere and an alien craft hovers above before destroying the vehicle and Sveta along with it. The Cigarette Smoking Man, now smoking via his tracheotomy, gets a worrying phone call – The X-Files has been re-opened. 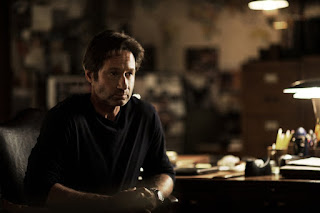 Where do I begin? There is much right with the episode for sure but there is so much that doesn’t really fit and smacks of being forced that I am not sure I fully enjoyed it. The voiceover at the beginning seemed strange. Do we really need a history of The X-Files put over photographs for 30 seconds by a Duchovny that seems uninterested and passionless? Is there someone in the world, no matter their age, that needs The X-Files explained to them before they watch an episode? If there is, may I suggest that perhaps The X-Files isn’t for them anyway? It just feels like a network insistence rather than Chris Carter’s doing. I can’t believe for a minute that Carter thinks his audience are so dumb that stuff has to be explained to them so simply. But Carter has made mistakes throughout this opening episode so it’s possible the writer, once the golden boy of television, is hugely out of touch. By undoing the alien conspiracy in 43 minutes it feels like Carter has started to unravel the 9 years that came before. It feels like The X-Files is now forced to live in the post 9/11 world and be more political instead of leading the world with great storytelling like it used to. The whole weather wars/consumerism rant that Mulder went on didn’t come across as an intellectual ex-agent realising he has been duped but more of a political party statement on behalf of the world that is fed up with abuses from the right of power. It felt too much like it was trying to be relevant to garner an audience. This is The X-Files! It already has an audience.

Small things also annoyed me. O‘Malley was supposed to be this Republican conspiracy theorist and yet seemed to be led by Mulder rather than the other way around. Whether you like Alex Jones or not, he is the most vocal anti-government conspiracist in the world. Do you ever imagine a time where Jones gets led anywhere by anyone? No, I didn’t think so and this watered down the O’ Malley character that I felt could have lifted the story more from the obvious political statement it was and more into the world of conspiracy theories which are fascinating whether you believe them or not seemed wasted. Mulder visits his old office in the F.B.I building and we are to believe that it hasn’t been cleaned or reused in over a decade? I know, it’s a small criticism but the pencils in the ceiling was a nod to the old days and nothing more as they held no storytelling purpose. This never used to happen in The X-Files, everything no matter how small, had a purpose in the narrative.

There were some good moments. The awkward and obvious strained relationship between Scully and Mulder, who obviously still care for each other but can’t live together, was played out well, Anderson in particular impressing. Duchovny seemed to have more energy when he was onscreen and was more the excitable Mulder of the past, when politically grandstanding, which shows again that you need to see him to believe him and leads to THAT voiceover being even more unwarranted in that it was supposed to set the tone and fell flatter than Duchovny’s voice. The special effects were incredible, and showed just how well they did in the old days with no technology and no budget, and the cast were all solid.

As a television episode it was better than most things out there but as an X-Files episode the truth is somewhat skewed by nostalgia on first watch but becomes evident on the second that it is just not very good. With the late appearance of CSM and an announcement that The X-Files is reopened I am hopeful for the rest of the season and am happy to write this episode off as maybe a necessity that no one actually needed, a mistake by a writer and a network perhaps nervous about bringing back something this iconic. Hopefully next week will prove it right and we will all be sat here loving it and nostalgia be damned. The truth is out there… Just not sure we’ve seen it yet.