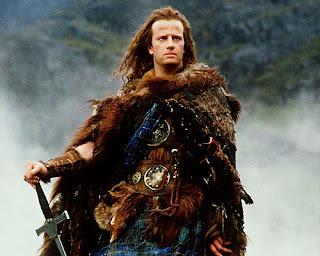 Our small band of Gunters here in the /G-f universe are reviewing every film mentioned in Ernest Cline's Ready Player One. Steve Taylor-Bryant with his thoughts on Highlander, which turns 30 this week...


They are immortals, destined to live forever. They must duel down the ages until one remains. Only decapitation by sword can release them from their age long battle for an incredible prize - power beyond imagination. From the Scottish Highlands of the sixteenth century to present-day New York, they war for the Prize, while the fate of mortal men hangs in the balance.

Nostalgia plays a large part of my love for this film. It has to, otherwise you realise that it's actually not very good. It's not cast particularly well, Christopher Lambert doesn't convince me as the French speaker he is in real life so he was never going to sell being from the highlands of Scotland to me. Sean Connery as a Spanish man? Really? Were the casting agents on hallucinogenic mushrooms? The rest of the cast could have been made of wood such was their performance and the special effects weren't even great by 1980's standards. The whole film feels cheap and lacking in quality, it's not particularly well directed by Russell Mulcahy who, I was surprised to learn, is still working, and the edit is shaky at best. That being said I love this film.

There is a lot to be said for just having fun whilst watching a movie. It may not have been the film-makers intent that I view Highlander as a comedy rather than some kind of epic fantasy story, but I do and it works. The awful attempts by Lambert to carry off brooding whilst suppressing a smile make me root for Conner Macleod, I buy into his reluctance to fight but his need to survive however I do it whilst grinning. The effects are awful, the sword fights not great but I can forgive all that as Freddie Mercury sings over the top. When the camp frontman of Queen is the only guy who sounds like he's taking the project seriously you really know you aren't going to get a proper thespian performance from anyone, but that's okay because Highlander is the perfect example of escapism. It's a film you can put on and just switch off your life whilst you watch.

Thank goodness there can be only one... Wait! What?