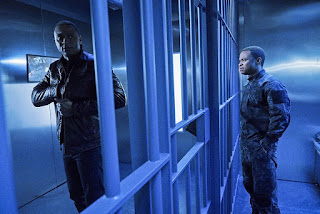 Steve Taylor-Bryant sees the Diggle brothers’ wartime past come back to haunt them as he reviews the latest Arrow episode, A.W.O.L...

"I love how playing superhero is what we consider normal."

John and Lyla are taking a romantic stroll when they are surprised by Alan Chang, an A.R.G.U.S agent. Soldiers jump them all and take Chang. Oliver is carrying Felicity to her wheelchair in their apartment and they are talking about her pain management. Felicity explains she has too much on her mind right now to return to TeamArrow. Diggle asks Andy about helping them with Chang’s abduction. During the first flashback we see the Diggle brothers in Afghanistan as their Humvee is attacked by rebels. John makes a bomb from a petrol can and Andy helps distract the insurgents whilst John gets it to blow up. Back at the apartment Felicity is hearing voices that are taunting her and, when she sees the character that owns the voice, it’s her old self the cyber hacker rebel. For my own sanity whilst these two incarnations of Felicity talk to each other I will from now on refer to the hallucination as PunkFlick. The police discover Chang’s body dead after torture and with an eye missing. Diggle and Lyla go and see Amanda Waller at A.R.G.U.S who says she won’t tell them anything but sneaks a flashdrive to Lyla which gives the details of a band of ex-military black ops soldiers called Shadowspire. Flashback to Afghanistan and the brothers’ commanding officer offers them a slice of the take if they steal the opium shipment they are guarding. Andy calls his officer a war profiteer and refuses, which makes John very proud.

John confronts Andy about Shadowspire and Andy tells him that he used to be part of them and he offers to help, telling John to check the port. TeamArrow need all the high tech security shut down so Green Arrow phones Felicity, who is still being ridiculed by PunkFlick. The container has two dead A.R.G.U.S agents in it and something goes wrong with the security that traps Green Arrow inside whilst soldiers surround John. Green Arrow causes an explosion which leaves a hole in the container so he can escape and grab John and get out of there. Felicity thinks the entire event is her fault and tells a worried Oliver that she won’t be helping the team any more, whilst being ridiculed by PunkFlick. John takes Andy to A.R.G.U.S to meet Amanda Waller who wants to know how Shadowspire knew about her secret operation. Andy explains that it’s not what she thinks, Shadowspire are experts in misdirection so their real target will not be what people are expecting it to be. Oliver is frustrated and sparring with Laurel. He explains that The Flash had gone back in time and changed an event and so what was happening now to Felicity was time fighting back. Felicity is meanwhile still being mocked by PunkFlick and being told that wanting to be a hero was the wrong choice and she go back to how she was in her past.

TeamArrow is watching a shipment of guns that Waller thinks Shadowspire are after and John is not happy as he is stuck at A.R.G.U.S with Andy, watching his younger brother’s cell. Shadowspire, though, aren’t at the port looking for guns, they are breaking into A.R.G.U.S with Chang’s eye for help. Lt. Joyner, the lead man, wants something from Waller called Rubicon and the codes to access the deeper vault to get it. She refuses and he shoots an agent before giving her 20 minutes to change her mind, when he will shoot someone else if she doesn’t comply. John sees what is going on via the prison section’s monitors and remembers something Felicity taught him so reverses the feed on the monitors so they transmit and TeamArrow will see. Felicity arrives at the ArrowCave to tell Oliver she is back and they are a team and nothing is their fault. She is fed up of being angry and full of self pity and it’s time to look forward and not back to the past. Their monitor beeps and they see the footage from within the A.R.G.U.S siege. The flashback sees an angry John confront Andy about his cosy conversation with Joyner. Andy convinces John they were talking about Blackjack.

Waller states that she will not give Joyner the codes and says to him that Lyla Michaels knows her and she doesn’t care about human life. Joyner shoots Waller and puts Lyla in charge of the situation. She now has 20 minutes. Andy is begging John to let him out so he can help. TeamArrow arrives with OverWatch on comms (Felicity’s new name as Oracle is taken). Shadowspire soldiers find Andy in the cell and he is taken to see his old friend Lt. Joyner. He explains that Lyla is his sister-in-law and that his brother, John, is somewhere in the ventilation shaft mounting a rescue. John is captured and brought to Joyner who has now freed Andy. Lyla agrees to give Joyner the codes but, whilst she is trying to access them, she is being locked out by Felicity. Joyner is about to shoot John when Andy jumps to the rescue, Green Arrow arrives to help and Shadowspire are stopped. Flashback time and we see Joyner give Andy an envelope of cash from his boss for his part in the opium theft. His boss arrives to tell Andy about a mystical island. His boss is Baron Reiter. Oliver and Felicity have a chat and Felicity burns a picture of PunkFlick and says her past is forgotten and Oliver whilst very aware of Felicity’s injury explains they live in a meta world now and he’ll never stop looking for a way for her to walk again. John takes Andy back to his home and introduces him to his niece.

This week was good. It wasn’t last week good but it tied a few things up and started to open more stories which was pleasing. Andy was finally involved in a story with some substance and a bit of action and the Diggle brothers flashbacks tie the Baron Reiter origin to where we are in Oliver’s flashbacks so that one is sure to continue running. Felicity reflecting on her past was sure to happen after such a horrific injury and the writers handled it in a way that completely suited Felicity’s character by going nuts. The main story was probably not important as this week’s episode was about the human element and facing what has come before and working out how to go forward with your life. All important lessons and all handled very well.