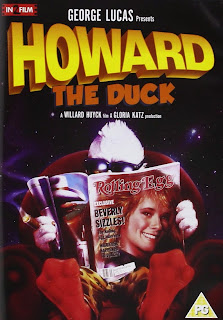 Our small band of Gunters here in The DreamCage universe are reviewing every film mentioned in Ernest Cline's Ready Player One. This week Steve Taylor-Bryant takes on Howard the Duck...


Marvel Studios, or whatever they were called in the old days, had done a few television adaptations by the time 1986 had come along but hadn’t done a film adventure since Captain America in the propaganda riddled forties. Along comes Lucasfilm head honcho and man who can do no wrong, George Lucas, with the plan to revitalise the Marvel-screen product – Howard the Duck: A New Breed of Hero. It’s funny how things pan out. Howard the Duck nearly destroyed Marvel, until they were rescued by Disney, who now own Lucasfilm. It’s like one big twisted ever decreasing circle of talent to flop and back to talent again that even in the incestuous world of Hollywood, takes some beating. Yes, Howard the Duck was an awful flop. Critics and film goers alike lambasted Lucas for his live action production, siting that animation would have worked better, Willard Hyuck was criticized for direction of what was quite a talented cast, and Marvel his under the bed pretending like it had never happened. The problem I have is that I LOVE IT! What’s not to like? It is so quintessentially eighties it’s delightful, it has a wise-cracking, sarcastic, talking duck from outer space, what is wrong with you people?

Howard lives on Duckworld, a planet of, well, ducks that have humanoid form and can talk, have intelligence and are very like the inhabitants of Earth. Howard is starting his day as he always does by sitting in his favourite armchair and leering over Playduck magazine. Violent movement like an earthquake throws Howard from his chair and out of the window into outer-space. Howard travels through the stars and lands on Earth, Cleveland in Ohio to be exact. Howard stumbles upon a mugging and uses Duck-Fu (honestly? What else would you call a duck with martial arts skills?) saving the life of Beverly Switzler (Lea Thompson – Back to the Future) in the process. As a thank you Switzler gives Howard a place to stay and offers to introduce him to a scientist she knows that might be able to help in get back into space and home. 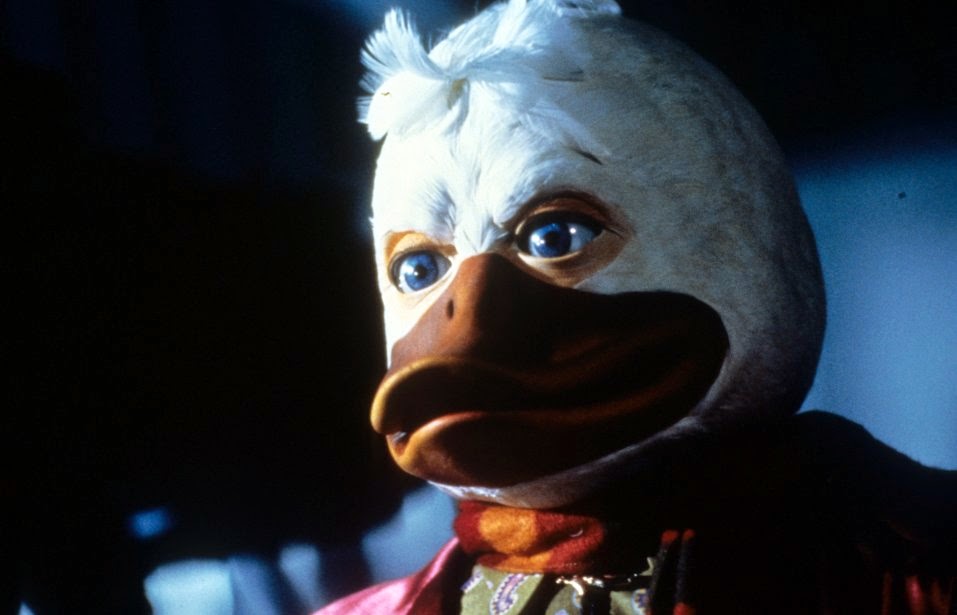 Phil Blumburtt (Tim Robbins – The Shawshank Redemption) the scientist that Beverly knows has been fooling her all along though and is nothing more than a caretaker. This obviously disappoints Howard and he has to get used to the fact that he will probably be stuck on Earth forever. After not being able to hold down a job, Howard joins Beverly and her rock band, Cherry Bomb, at the venue they are performing at. After catching the bands manager being abusive about them Howard fights him, wins, and becomes the bands manager. Just before Howard and Beverly can get down and dirty Blumburtt and some of his friends who are ACTUALLY scientists burst in and furnish Howard with the information that their device, a dimensional jumper, was the reason that Howard ended up on Earth as they had been pointing it at his planet. When they try and use the device to get Howard home it doesn’t work as something else is already on its way to Earth. That something else takes over the body of Dr. Walter Jenning (Jeffrey Jones – Ferris Bueller’s Day Off) and introduces himself as Dark Overlord.


Dark Overlord uses the opportunity that arises from Howard fighting people in a diner to abscond with Beverly and they go to the laboratory where Dark Overlord plans to put more of his kind into Beverly’s form. Blumburtt and Howard manage to get out of the trouble they are in and arrive at the lab to save Beverly with another scientific gadget, eventually destroying Dark Overlord. Howard though doesn’t want anyone else use the dimensional jumper to get to Earth and so destroys his only chance of ever getting home, to set up life with Beverly and the band. 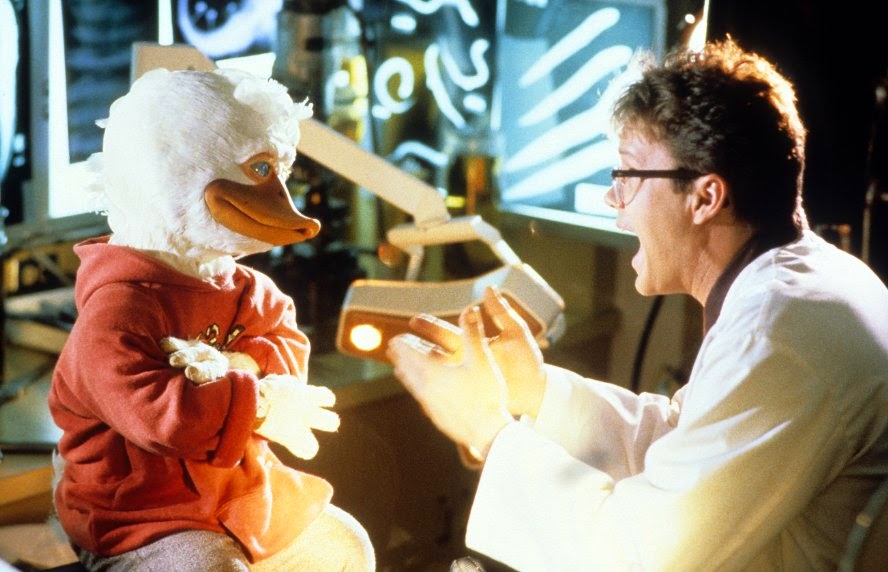 Yes I know, terrible, terrible idea. A duck from outer space conveniently saves a damsel in distress who happens to not mind the fact he is a duck and has ties to very scientists that brought him to Earth. But seriously it’s based on a comic book so that can be forgiven. Yes the duck costume looked clunky onscreen, yes the script and story are full of holes but this was 1986 and I was eleven years old. I’ll be honest now with the exception of a few alcohol induced watches a few years ago I'd have forgotten all about Howard the Duck had it not been for the end credit sequence in Guardians of the Galaxy and his reintroduction to the Marvel universe.


I know Marvel have no plans at the moment for another stab at a Howard movie, but he deserves it, he certainly needs more than a quick cameo at the end of a film and I hope now Marvel are in the talented part of their circle at the moment they find it hearts to atone for George Lucas and all he did to a superb character…Oh and torture the bugger for Jar Jar Binks whilst they’re at it.