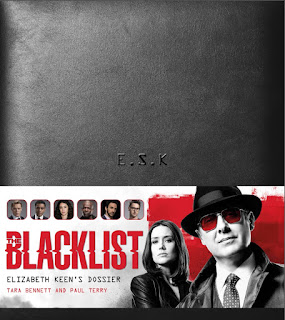 Titan Books announce something very special for fans of The Blacklist...

An opulent visual celebration of the hugely popular and critically acclaimed TV series The Blacklist, the book expands on the world of the show. Featuring in-world documentation, photographs, maps, newspaper cuttings and Liz’s detailed notes, some of which have never been seen before, it pieces together the puzzle that is Reddington’s Blacklist. Beautifully packaged in an elegant leather­esque cover, the book expands on the world of Blacklist and gives an in-­universe look at the life of Elizabeth Keen and the events of the first two seasons and beyond.

The Blacklist is the highly successful NBC show that stars James Spader, Megan Boone and Diego Klattenhoff. It follows FBI profiler Elizabeth Keen whose life is overturned when Raymond ‘Red’ Reddington, one of the FBI’s top ten most wanted criminals, turns himself in and demands to speak solely to her.

The Blacklist: Elizabeth Keen's Dossier will be released on the 29th March.

ABOUT THE AUTHORS: Paul Terry co-­‐authored the LOST Encyclopaedia, Sleepy Hollow: Creating Heroes, Demons and Monsters and Fringe: September’s Notebook and was the editor of Bad Robot/ABC’s official magazines for LOST and Alias. Terry is also a songwriter/composer whose film scores include the award-­winning werewolf comedy The Furred Man. Tara Bennett is the author, or co­‐author, of several movie and TV companion books including Fringe: September’s Notebook, Sleepy Hollow: Creating Heroes, Demons and Monsters, LOST Encyclopedia, The Art of 300 and The Art of Terminator Salvation. She has written nearly a thousand features for publications such as: SFX Magazine, LOST: Official Magazine, Alias Magazine, 24 Magazine, SCI FI Magazine, Blastr.com, WSJSpeakeasy, and Movies.com.