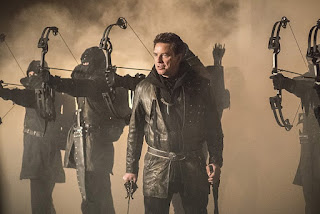 Oliver and Nyssa are arguing about her conditions on helping Thea whilst Felicity meets Noah, her father and The Calculator, for coffee for the first time in 18 years. He makes his excuses for leaving her and Donna, tells Felicity he was working for someone, that the destruction of Star City was just a ruse and he knows his daughter is OverWatch. He then offers Felicity verifiable proof of his operations over the years to show that they aren’t that different. Oliver is meanwhile having to explain to Diggle and Laurel that he won't kill Malcolm Merlyn and has come up with a plan to get Malcolm to hand over the League to Nyssa. Laurel goes to Nanda Parbat to asks Nyssa to compromise and Malcolm is telling Oliver that he won't play games with Thea’s life. Nyssa says she is going to declare war on Malcolm Merlyn on the streets of Star City and Felicity finally tells the team that her father is the elusive Calculator.

Nyssa is practising a mass battle with her soldiers when Oliver goes to visit. Oliver asks for proof that the elixir ‘Lotus’ is truly what she says it is so his deal with Malcolm can work. Nyssa hands over enough to make Thea well temporarily but not cure her indefinitely, Nyssa is still pretty gung ho for a fight. Back in the ArrowCave they administer Lotus and Thea wakes up feeling better for a short while. Malcolm agrees to hand over the ring that will make Nyssa the Demon’s Head. Donna comes to visit Felicity and sees the sadness on her face and equates it to a lost cuddly toy from Felicity’s past, as only a mother could. Felicity explains that Noah is back and Donna is angry, stating that people never change and he will have an ulterior motive for being back in Felicity’s life. At the meeting, Malcolm refuses to hand over the ring and starts fighting with Nyssa and her soldiers. Oliver stands in front of Malcolm as Nyssa flees and questions why he wants the League and the power more than he wants Thea to be well. He counters that Oliver should never question his love for his daughter and retreats. Oliver needs a plan to take down both Malcolm and Nyssa.

At a crime scene, Captain Lance shows Oliver and Diggle dead civilians that are being caught in the crossfire and tells them they need to fix this situation and quickly. Diggle tells Oliver he knows he is a changed man but needs to give in to the hate he has for Malcolm and end this. Noah visits Felicity at the RnD department of Palmer Tech where they talk about science and the baby steps needed to work on their estrangement. TeamArrow are on the hunt and Laurel stops Nyssa and her goons in an alley but they're ambushed. Laurel uses the Canary Call to floor the soldiers whilst Nyssa flees. There is fighting in the streets and civilians are being shot with arrows. Oliver arrives and tranquilises Nyssa and then locks her up in a cage in the ArrowCave. Laurel begs her for the Lotus cure, saying that Nyssa should be herself and not be like her father. Felicity is upset and tells Oliver that she set a test for Noah and he failed, she found out he tried to steal all of the ideas and files from Palmer Tech during his visit. Oliver is still holding out hope that people can change like he did when he notices Malcolm has sneaked in to be with Thea. Malcolm tells Oliver how much he loves Thea but the work of the League is bigger than one life. He mentions Oliver’s secret son, William, and states he won't back down. Oliver suggests a winner takes all trial by combat.

On a rooftop, as Nyssa and Malcolm are about to fight, Oliver calls a halt to proceedings and says that in the eyes of the League he is still Nyssa’s husband and wishes to fight on her behalf. Nyssa isn’t happy but allows Oliver to stand in her place whilst Malcolm thinks Oliver is being foolish. The fight begins and, when Oliver has Malcolm in a position where he can kill him, he decides to just chop off his hand instead and then swaps the ring for the Lotus potion. He informs Nyssa she is now Ra’s Al Ghul and everyone bows. The potion works and Thea is cured of her illness and the blood lust. Felicity meets Noah in her office and tells him that she doesn’t trust him as he had hoped she would and has him arrested. Nyssa summons Oliver and Laurel to Nanda Parbat and then Malcolm before explaining she is definitely her own person and has disbanded the League of Assassins and melts the ring, which annoys Malcolm and he threatens to ruin Oliver’s life. Oliver tells Felicity she did the right thing with Noah and, now the League is disbanded and it’s a bit quieter, they should move up their wedding. Malcolm meets with Damien Darhk and tells him the way to hurt Oliver is to go after his secret son.

When you add in the flashbacks on Lian Yu with Taiana looking after Oliver, despite him having killed her brother, and Oliver talking about how his evil dad gave his life so that Oliver could right his wrongs, you can see that this week really was about the impact fathers can have on their children. This was an episode that explored the relationships we sometimes forget these superhero characters can have whilst, at the same time, driving a story that has been going for weeks now. Malcolm was ultimately defeated but still has that evil revenge streak in him and I must admit that every time John Barrowman is on screen the show steps up a level and every part of his Malcolm character is worth whatever fee you pay for watching television. Seeing Malcolm interact with Damien Darhk at the end gave me chills and now we will see the secret of Oliver’s son come out into the open as the Sins of the Father continues through the series. Tonight's show ended some story strings, tying up some nice little plot points, but has led to more being created which is what episodic television needs. My only complaint is one that I've had for a while now and that is Nanda Parbat. This supposed mystical home of Ra’s and the League of Assassins just seems a bit too easy to get to quickly. I can't get to my local supermarket as quick as the characters can travel to Nanda Parbat and I am a little pleased that the League story seems to have been extinguished, for a while at least, as Nanda Parbat was becoming a weak part of the story and a bit of a joke. After that ending though we are now going to see Damien Darhk go up a level so bring it on!