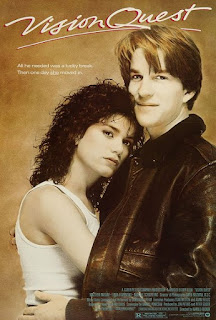 Our small band of Gunters here in the /G-f universe are reviewing every film mentioned in Ernest Cline's Ready Player One. This week David Ames with his thoughts on Vision Quest...


When we began the RPO project, I was presented with the list of movies referenced in Cline’s book and told to take a stab at any that strike my fancy. This film, 1985’s Vision Quest, was the first on my list. I mean…I am a high school English teacher and a wrestling coach and this is the only movie that I have ever seen encompassing the world of high school wrestling (aside from that trash movie Legendary with John Cena). I watched this movie religiously as a high school student, even though I went to high school in the early 2000s, and this was the film that we always watched when we were prepping for a wrestling match.

Let me start with one very explicit and accurate detail about this film: Vision Quest is ridiculously 80s.

Vision Quest follows high school wrestling star Louden Swain (Matthew Modine of Full Metal Jacket fame) who wishes to do something bigger than himself. He begins a vision quest (a Native American spiritual journey) to cut multiple weight classes and wrestle Brian Shute, the best wrestler in the state. The film is rife with amazing 80’s clichés: the music montage, the workout montage, the I’m-in-love montage.

Basically the film is a montage extravaganza.

In the course of his journey, he falls in love with an older woman (she’s 21) who is from the oh-so-80s standard of the “wrong side of the tracks”. Carla (Dogma’s Linda Fiorentino) plays the New Jersey expatriate heading to California to be an artist. Louden pines, obsesses, borderline rapes (because it was the 80s and it was evidently not that serious), and eventually wins the heart of the woman. I’m not sure why attempted rape leads to love but I wasn’t aware enough to understand the workings of the female mind in the mid 80’s (I was 1) so I can’t judge.

Louden regains control of both his weight and his quest and eventually goes head to head with Brian Shute, the 160lb. champion who, when looked at closely, easily weighs 230lbs. I laugh every time he is introduced: he is climbing the bleachers of a football stadium carrying what appears to be a telephone pole on his shoulders…yeah…he’s 160lbs.

Aside from all of the cheesy over acting, plot-holes, and thin story, this is a film that is enjoyable; a real treat for anyone who loves the 80s. Actually, to tie into John Hughes one more time: Louden’s best friend Kuch is played by none other than Michael Schoeffling. That’s right…JAKE FUCKING RYAN IS IN THIS!!!

And on top of all the 80s awesomeness, the soundtrack is pretty fantastic:

And of course, the hit of the film and the song that is heard at almost every high school wrestling tournament still today: Red Rider’s “Lunatic Fringe”. Go listen to it below right now…I’ll wait…

It is no wonder that this film was referenced in Ready Player One. With the combination of story, hilarious 80s tropes, and that killer soundtrack, this movie is so 80s that John Hughes wept at the sheer joy of its existence.