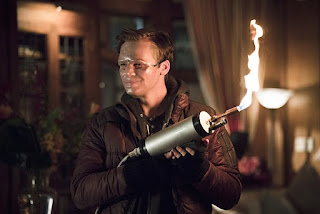 Steve Taylor-Bryant returns to action as the ramifications of the attack on Felicity continue to affect TeamArrow in Blood Debts...


"I've never been more ready to have lots of men inside of me. Doctors! I mean doctors"

Felicity is being rushed into surgery and a vengeful Oliver is tearing through Ghosts looking for Damien Darhk. Diggle is trying to beat Darhk's whereabouts out of his brother Andy and basically everyone is a bit angry. Captain Lance gives Oliver the address he used to meet Darhk at but Anarky has already been there and is one step ahead of TeamArrow so he now becomes their prime target. Felicity exits surgery but the prognosis is not good and it appears she will never walk again. The team find Anarky, who won't give up Darhk's location as he to has an axe to grind with the magic man, so Oliver keeps him imprisoned until Laurel decides that's not right and hands him over to the authorities. Green Arrow releases Anarky from the police transit, much to everyone's disgust, but has placed a tracker on him, betting everything that Anarky will lead him to Darhk's hideout. However Anarky has different ideas and loses the tracker, leaving Oliver distraught and with no plan.

He finally visits Felicity and lets her know he still loves her and won't be leaving her despite her offer for him to not be involved with her now she's broken. Laurel tells Oliver that Diggle has found Darhk's address but, when they arrive, Anarky is already there all set to torture Darhk's wife and daughter. Oliver saves Darhk's family but Anarky flees after Speedy holds back her blood lust and doesn't kill him. Saving Darhk's family buys Green Arrow some grace and Darhk promises to not kill him or his friends for a few weeks. Darhk escapes with his daughter and his wife, who also appears to be Darhk's boss or at least equal. Interspersed with this are some flashbacks to Lian Yu that show Oliver's tattoos magically light up, which Baron Reiter believes is the information he needs and stops Conklin from killing Oliver. The episode ends at the grave four months after the events of the episode. THE grave which, it now turns out, definitely doesn't contain Felicity as she is in the limousine with Oliver. Both are distraught though so the grave is definitely someone close to them.

Sometimes a show comes back from the mid season break and it's slow. It's hard to get back into and the rhythm is gone. Not Arrow though. It begins at a relentless pace and barely slows down. Anarky was brilliantly psychotic and the added face mask gave me chills. The fight scenes are what you expect from Arrow now, brilliant, but the anger inside Oliver hasn't been this pronounced for a long while and it was good to watch as he battled what he used to be against what he has become. It's a journey that started in Season 1 with body count after body count but became more tactful and watching Stephen Amell torn between old Oliver and new Oliver has been a highlight. Diggle's relationship with his brother finally got some screen time and the emotions I've been crying out for and the story itself is growing quite nicely towards what I think is going to be quite the dark second half of the season.

I'm so glad Arrow came back this strong and roll on next week.