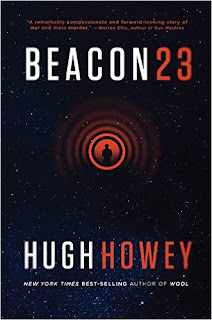 It is a lonely job as Nate McKenzie reads Beacon 23 from Hugh Howey...

Isolation is a well-tread motif in popular culture. Cast Away, Open Water, Buried. Even OldBoy to an extent. Just last year we saw (or read about) Marc Watney trying to survive being stranded alone on another planet in The Martian. People are drawn to stories centred around being alone, whether self-inflicted or by unmitigated circumstance. Is this obsession a product of our desire to seek out the quiet that allows us to think, commune with ourselves, or commune with nature due to the overpopulation crisis in the world, or do we, deep down, simply enjoy the anxiety and dread that accompanies helplessness?

These questions, among others, percolate in the brain while reading Hugh Howey's newest novel Beacon 23.

These beacons are built to be robust. They never break down. They never fail. At least, they aren't supposed to.

In the 23rd Century interplanetary travel has progressed to the point that beacons are dispersed throughout the universe as lighthouses to provide safe travel for passing (space)ships. On Beacon #23 the main character, Digger, is the sole operator of his dilapidated post.

As the lonely operator of this 'lighthouse' in the middle of space, Digger spends most of his time on upkeep of the facility, warding off the failures of archaic equipment in order to maintain a safe thoroughfare for passing craft. This he does, however, not simply as a feeling of duty or responsibility, but as a means of occupying his tortured mind.

As a soldier in the military, Digger came to a fateful conclusion of his multiple tours when he encountered a hive of alien enemies on their home world during a campaign to eradicate their species. Now labelled a war hero, he is racked by guilt and unfiltered self-pity stemming from his decisions on that day.

His post, seen by others as a reward of quiet, peaceful solitude, is in truth a self-inflicted marooning as means of escape; he plans to stay as far from the ever expanding action of the war as possible, for as long as possible.

When a tragedy occurs due to his negligence aboard the beacon, it sets in motion a series of events that may bring the war directly to him.

Strange the lengths I’ll go to in order to keep people away from me, considering how lonely I feel most of the time.

Beacon 23 is actually a five part series of short stories by Hugh Howey. His breakout work Wool was written in the same style, as it was self-published through online outlets and consisted of successive stories that eventually became what is known as Wool Omnibus; likewise, Sand is a serial novel conjoined to create a full length book. This is a unique way of garnering interest from an online community while still fleshing out the storyline and Howey has made this style somewhat of a trademark process. Without a doubt, no one is doing it better. But the depth of the characters and the worlds which he conjures are the reason for his devoted following.

What pervaded my mind while reading Beacon was that this wasn't so much a story set in the future as it was a story set in the present but in a different dimension of the multiverse. In that regard, the futuristic nature of the story is very deeply rooted in the past. The colloquial language and contemporary reference was a major part of creating that sense (at one point, Digger says "I also very purposefully employ the caps button, because they can, in this way, hear us scream in space.").

Howey begins this most recent foray as a rather light, yet still introspective, Science Fiction jaunt. Quickly, that all dissolves into a solution that is one one part analysis of the effect of solitude on an already fragile psyche, one part seeking new refuge after refuge fails, and one part treatise about the perils of war.

As far as science fiction goes, Beacon 23 isn't groundbreaking. Wool and Sand are both far more original stories with worlds previously never imagined (especially Sand). But I don't think Beacon 23 is meant to be a companion guide to a possible future alongside those books. Howey wasn't adding this story to his "Universe" a la Kevin Smith's View Askewniverse.

Rather, it stands alone as a warning (a beacon, if you will) about the impending consequences of our very real, very this-world actions. Wool had an air of that as well (dealing with the fallout of nuclear engagement), but in Beacon the message is more personal and much more clear: no matter how much the world around us changes, no matter how far we progress as a species, if our decision making process does not evolve as well, we are doomed to repeatedly tempt fate and suffer her wrath.

Digger is a tragic hero. He is Sam Bell on the moon, kept company by nothing more than his hallucinations. He is a shadow of Ender Wiggins, without the burden of prodigy. He is Christopher McCandliss, escaping into the wild, but without the hope of self-discovery and revelations of "truth".

An authentic representation of how eviscerating war can be, set in the domain of previous SciFi giants such as Clarke and Adams, Hugh Howey's Beacon 23 is simultaneously as entertaining, funny, and sweeping as Vaughn and Staples' Saga and as terse and tangible as Tim O'Brien's The Things They Carried.