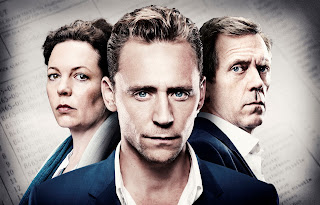 Out on DVD and Blu-ray today, Steve Taylor-Bryant looks back over the BBC adaptation of The Night Manager...

I love the spy genre. It's possibly my favourite as it’s the first specific example of a genre I got into as a child and as I grew up (stop chuckling mother!) and it's one I return to again and again. I love the old fashioned spy stories of infiltration and paperwork, of contacts and travel. I love the new spin on espionage that modern technology has given us with computers and phone hacking. Most of all, I love the fact that, no matter what type of spy story you are watching or reading, you can guarantee that it is more character driven than any other type of entertainment available. It has to be. It has to have the men and women on the front line or behind enemy lines, it has to have someone that can research the information that's being given to them, it has to have someone whose role is one of power and decision making and it has to have an evil counterpart, whether that be a roguish political structure like in a Cold War novel, or a dictatorship, or an arms dealer, or a tech wizard that can hold the world to ransom. Herein lies a problem though. A great writer, le Carre or Len Deighton for example, will spend 400 pages building your trust, entertaining you and then twisting things until you don't know your up from your down and that makes for a fantastic book, a real literary journey.

Then, however, you try and cram that into a film or a TV show and you don't get the time to build like the book, the viewer demands action, immediate plot or you lose them forever. Obviously the story changes slightly, or massively, to fit the screen incarnation and then ends up millions of miles from the original source material. There are exceptional films and TV based on the books I love though. Tinker, Tailor, Soldier, Spy was epic. Back in the day, Game Set and Match worked quite well as long form television, but usually the films are just okay and not a patch on the book. Take Philip Seymour Hoffman's excellent performance out of A Most Wanted Man and the film is nothing, which is a shame because I love the book. So enter two great actors, the brooding Tom Hiddleston and the menacing Hugh Laurie, and a television adaptation of one of my favourite John le Carre novels, The Night Manager. I'm rubbish at avoiding spoilers so before I even sat to watch the first episode I'd read that le Carre had stated it changes a lot from the book but my disappointment was damped by him also saying it's well done.

Let's get the obvious changes out of the way first. The world and therefore the intelligence community changed after 9/11. Recruiting wasn't just from elite schools, technology came to the fore and the role of women in the spy game became more prominent. It also gave us a new enemy and entrenched us even further into the Middle East than we had been before. Some of our old foes just weren't relevant any more, South America, the IRA and the odd home grown terrorist seemed to go by the wayside and, as the new century grew older, the Arab Spring started with multiple uprisings across continents. To modernise The Night Manager, writer David Farr took le Carre's book from the mid-nineties and firmly placed it in this new period of a tumultuous time.

The rise of women mentioned before gets a look in with Pine's Whitehall handler shifting genders from the novel and being portrayed by the wonderful Olivia Coleman. Coleman's character, Angela Burr, was someone everyone in government was unsure of. Female, with a regional accent and not of Cambridge University but, despite this, Burr knows how to handle an operation and can control her team. Her relentless pursuit of Roper leads Burr to think outside the box with the recruitment of Jonathan Pine and her desperation for the operation to succeed is wonderfully played by the faultless Coleman. 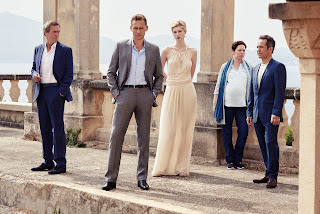 For all Hiddleston's brooding and Laurie's Oxbridge menace being the dominant forces of the story I have to mention Tom Hollander, who mixed campness and psycho tendencies with aplomb playing Roper's henchman/assistant/right hand man Corcoran. His loyalty to Roper and distrust of Pine was beautifully played out by an actor I've always found to be hit or miss and Hollander certainly added something welcome to the narrative. Other wonderful performances in the supporting roles include Elizabeth Debicki as Roper's squeeze Jed Marshall who was so much more than just eye candy, and Alistair Petrie as Roper's somewhat creepy attorney Sandy Langbourne.

So on to the main two and the reason a lot of people may have watched something they wouldn't usually consider. I'm a huge fan of Hugh Laurie. For me he never misses a beat, everything he appears in is better for his involvement but no one, it seems, took him seriously as an actor until he did House. I get that he was one of the funniest guys the UK produced in our comedy heyday of the 1980's but he always had that twinkle in his eye that said he was destined for more. Before House, Laurie wouldn't have been allowed a role like Richard Onslow Roper and so House has to be loved for that. Laurie plays educated English very well because he is educated English however his natural sense of fun adds a layer of sarcasm to him that makes him a superb choice to play the villain. And play the villain he does well. It's not about action or bad language with Laurie. No, he comes across evil due to his calmness and vocabulary. When you know your hero is in trouble but the bad guy very softly and quietly delivers his threat eloquently and with no violent action, just implied menace, it leads to goosebumps on the viewer. This trait used to be seen quite a lot in the good old days but villains on screen in last few years have had a tendency to shoot first and worry about consequences later so, whilst Laurie is playing Roper old school style, there is a sense of freshness that I really appreciate as the viewer.

Hiddleston is not a favourite of mine. I like some of his stuff, in 2008's Wallander adaptation for example or I Saw The Light, but I seem to be the only person alive who found him really quite annoying in the Marvel films and, not being a fan of the Shakespearian stuff all British actors clamour to do, I don't love Hiddleston as much as some. The rumours of Hiddleston wanting to be the new James Bond sent shivers up my spine but then I watched The Night Manager and finally grasped why other folk wax so lyrical about him. He was highly watchable, he was emotional, he handled the fighting and action better than I expected him too and I bought into him wanting to do his bit for Queen and country. In fact I can't fault any part of his performance in The Night Manager and I'm now quite genuinely excited to see what he brings to other roles. His onscreen time with Laurie was amazing to see. It was the older more experienced star baiting the young upstart and, due to the chemistry, they both improved something that was already very well written and cast.

I think a lot of love needs to be thrown at the network as well. In the awful political situation we find ourselves in, the BBC in particular is coming under incredible fire and scrutiny for everything they do. Governments and political wannabes seem to attack the Beeb on an almost daily basis and, whilst our once proud corporation most definitely has its faults, it has yet to crumble under the insanity it's facing and has bravely invested a lot of money and hope into its dramatic output. The Night Manager was superbly produced, directed, written and cast and could, if it's allowed, become the benchmark for drama in British television. We can only hope.