Audio - Doctor Who: Winter for the Adept 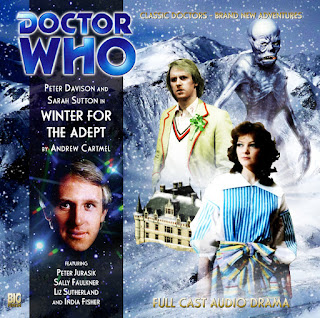 Our Doctor Who audio expert, Tony Cross, delves into the back catalogue available from the Big Finish website. Today is the Fifth Doctor and Nyssa adventure, Winter for the Adept...


Winter For The Adept is odd. It's a tale 'told' by Alison Spears (Liz Sutherland) who found herself trapped in an Alpine finishing school with her friend Peril (India Fisher) and two teachers, Mlle Maupassant (Hannah Dickinson) and the verging on the barmy Scottish headmistress and Bible basher Miss Tremayne (Sally Faulker). There's strange things occuring at the school.

Into which, of course, The Doctor and Nyssa stumble in. But not necessarily in that order. We find Nyssa first of all stuck in the snow having been dumped there by a gadget the Doctor was testing (and a gadget about which Nyssa has a strong dislike of as we see as the story unfolds). She's rescued by Lt Peter Sandoz (Peter Jurasik) who was on his way to check on the school for reasons that are both professional and personal.

By this point Alison and Peril have tried to escape the school so that Peril can 'elope' with her love. Who turns out to be Sandoz. Much to the shock and disgust of Miss Tremayne.

However that turns out to be the least of their worries. There's something a-hauntin' the school. A poltergeist. Furniture gets moved about. Windows shut mysteriously. Fundamentalist Christians get made mentally unbalanced. It's a creepy experience.

Then the Doctor turns up in the TARDIS. At which point Miss Tremayne faints and we get the first of three rather odd cliffhangers. None of which actually feels like a cliffhanger. They're all slightly casual and half-baked. I'm not sure if that's a bad thing or not. It's certainly...different.

Being Doctor Who the poltergeist can't just be a poltergeist. There has to be more too it than that, which there is. There's is a poltergeist. He's about two steps removed from being an escapee from Rentaghost. In fact this story comes dangerously close to feeling like a very serious episode of Rentaghost at some points.

Then it turns out that the poltergeist isn't quite the end of their problems. There are aliens about. Watch out, watch out. There is a fine running joke through about involving these aliens, the Doctor's gadget and his refusal to explain to Nyssa what they are. The Doctor does however see a chance to get one over on them.

The final episode is a bit rubbish I'm afraid. The ending is so convenient as to be utterly unbelievable. We know the Doctor's got the luck of the devil aka the luck of a central characters in a television series but this time its ridiculous. There's a stand-off, a shooting and an avalanche but somehow the Doctor wins out. Even though...well...even though...stuff. Sorry, but I don't want to utterly ruin the ending.

Being the Davison era we get strangers invited into the TARDIS like it is a garden shed and actually there's a space there for Alison and Peril to get into a series of scraps with the Doctor should anyone feel the need to write it. But perhaps they have. Or at least Peril's adventures with the Doctor.

Because Peril is nothing if not a dry run at Charlotte Pollard. Not just because she's played by the same actress, although with a degree or two less poshness, but also because Peril's personality isn't a million miles away from Charlie's. You can see why they picked India Fisher for Charlotte Pollard here. She's full of naive energy and a desire for adventure. Alison is rather dull in comparison.

The villains aren't particularly memorable, although the end implies they've met the Doctor before or are aware of him. They're just the usual pan-dimensional murderous invaders. With a penchant for dressing up.

I'm aware, re-reading what I've written, that I might sound a little harsh. It isn't a terrible story. It's got a thickly odd atmosphere at points. Miss Tremayne has a certain Miss Jean Brodieness about her but over-dosed with religion. Sally Faulkner's accent is a tad wobbly but I don't mind that too much.

Peter Davison is great. He manages to deliver a line about being chased by a piano without making it sound utterly silly. Sarah Sutton's good as Nyssa too. She's got a big more about her in this story than she sometimes does in the television series, certainly nipping at the Doctor a few times about his gadget.

So it's not a bad story, just not the best. Which I suppose not every story can be really. But not a personal favourite. For me it, The Sirens of Time and The Marian Conspiracy have been the Big Finish stories I've enjoyed least from the first ten. I think they did the creepy and weird building Fifth Doctor and Nyssa story better with The Land of the Dead with which this story has a certain similarity of tone. At least in the early episodes.

It kept me entertained on a long journey into work though so I really shouldn't be too churlish.