Book - The Age of Treachery 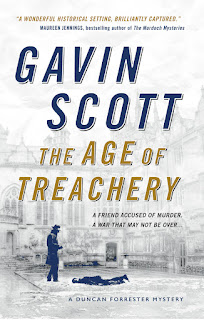 Steve Taylor-Bryant takes on the novel from acclaimed screenwriter Gavin Scott as he reads The Age of Treachery (Duncan Forrester Mystery #1) from our friends at Titan Books...

It is the winter of 1946, and after years of war, ex-Special Operations Executive agent Duncan Forrester is back at his Oxford college as a junior Ancient History Fellow. But his peace is shattered when a much-disliked Fellow is found dead in the quad, stabbed and pushed from an upper window. A don is suspected and arrested for the murder, but Forrester is not convinced of his friend’s guilt. On the hunt for the true killer, he finds himself plunged into a mystery involving lost Viking sagas, Satanic rituals and wartime espionage.

I knew of Gavin Scott before I sat down to read his novel, how can you not know him? Small Soldiers (Best children’s film aimed at adults ever), various episodes of The Young Indiana Jones Chronicles (that would be ripe for a comeback after the recent film news) and Treasure Island Kids have given both me and my children of various ages much pleasure over the years. However, I’ve never seen anything that I could consider ‘Grown-Up’ from Gavin so reading a full blown espionage novel aimed at adults gave me a sense of intrigue. Could a very good screenwriter, known in this family for young people's entertainment, step up and please just dad? Yes, yes he could.

Espionage and mystery are my favourite genres and some authors are better than others. Within spy and detective books, especially if, like The Age of Treachery, you are basing them in a time period not full of technology and hacking, you have to grip with your storyline and you have to have a character that the reader can buy into and root for. Without these things you have a dull action book. Scott has created with Duncan Forrester an agent that has everything you want. He is educated and smart, he is unafraid, and he is principled. Add in a fascinating era to base a story and some atmospheric and descriptive narrative and you have all the ingredients for a successful story. I really enjoyed The Age of Treachery even though I felt there was a small pacing issue in the final act but this was not enough to stop the enjoyment and, as this is just book 1 of a series, once Scott finds his groove I can only imagine the next instalments will go from strength to strength.