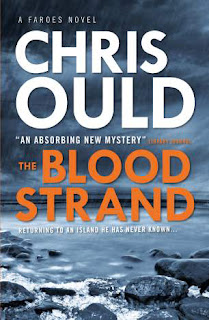 Susan Omand heads north for some Nordic-ish noir as she reads The Blood Strand by Chris Ould...

Having left the Faroes as a child, Jan Reyna is now a British police detective, and the islands are foreign to him. But he is drawn back when his estranged father is found unconscious with a shotgun by his side and someone else's blood at the scene. Then a man's body is washed up on an isolated beach. Is Reyna's father responsible? Looking for answers, Reyna falls in with local detective Hjalti Hentze. But as the stakes get higher and Reyna learns more about his family and the truth behind his mother's flight from the Faroes, he must decide whether to stay, or to forsake the strange, windswept islands for good.

I haven’t had much experience of Nordic noir up until now, unless you count the sublime Wallander adaptation that Kenneth Branagh did on TV a while back, so I was interested to see where this book would take me. The characters gripped me from the start and I’m not just talking about the people. The Faroe islands were characters in their own right, the buildings and scenery beautifully described and Ould perfectly captured the “feel” of a North Isles community – something I am familiar with, that wariness of strangers, the feeling of being an outsider, even if you are accepted. The storyline too was completely engaging, both with the police procedural, which also perfectly depicted the differences between island policing and the more metropolitan policing that Reyna was used to, and the intertwined story of a man looking to find his family history. I’m not entirely sure if Reyna trying to find out more about his mother and early life outwith the plot of the story was strictly needed, although building the family connections and dynamic absolutely was, but it in no way impeded the main crime plot and really didn’t feel like it was forced in just for the sake of having a second storyline. The action was very well paced, with enough going on to keep things moving forward without overloading on information and no one strand lagging behind another. It is quite difficult I think to keep that balance in parallel storylines. The other thing I really liked about the way this book is written is the switch between first and third person when required. If Reyna is involved at the time we see the story from his point of view, the rest of the time it is a third person narrative, which gives us as a reader a much more rounded view of events. I also really enjoyed the occasional uses of the native language peppered throughout as it gave the conversations a more authentic feel as did the English language constructs of those talking to Reyna, for whom English would be a second, if not third, language.

I want to say this book is an easy read but that’s not the right word and I don‘t want to do the writing a disservice. I think what I mean moreso is that it is a comfortable and satisfying read – it’s not as confusing or over-convoluted as other modern detective stories can be but neither is it a simple single threaded story, there are several twists but they all make sense after the fact. It’s an absorbing multilayered story that feels familiar and will still be highly enjoyable on a second and third reading.