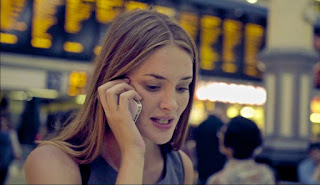 Fresh from its success at the National Film Awards earlier this month, find out more about the thriller Redistributors...

A city PR girl (Alexandra Evans) goes on the run accused of leaking information from the military supply company where she works. Pursued by ex-soldiers, she hides with her brother in a squat where he lives with anti-capitalist protesters. When she learns they are The Redistributors, a group famous for hacking tax evader’s accounts and passing money to the poor, she asks to meet with their charismatic leader (Alastair Mackenzie). She realises that with his help she can bring down her former employer before they get to her...

Alexandra Evans won Best Supporting Actress for her role in the film at the National Film Awards, her first major acting award, and the film itself received a nomination at the awards for Best Thriller which excited writer/director Adrian Tanner, who said “Alex put in such a great performance as Liz Gill and I’m so proud of her winning the award. With this recognition, I hope we can now go on to give fans more opportunities to see the film.”

Filmed in and around London, Redistributors, which also stars Alastair Mackenzie, Jeff Rawle and Tim Bentinck, has festival screenings ahead and we will have a review of it for you soon. In the meantime watch the trailer below.