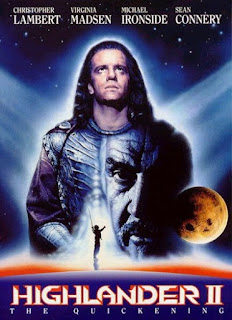 Our small band of Gunters here in the /G-f universe are reviewing every film mentioned in Ernest Cline's Ready Player One. This week Steve Taylor-Bryant with his thoughts on Highlander II: The Quickening...


THERE CAN BE ONLY ONE!

Unless sequels make money? Okay there can be only two or three, or maybe four and perhaps a television series but definitely not any more than that, okay?

And there within lies my problem with Highlander II. The cheesiness and problematic first film was okay on the eyes and with nostalgia you could even love it but the whole point was that there could be only one and maybe that edict should have applied to the films as well. Just because a film is on our Ready Player One list it doesn't mean I'm going to like it and Highlander II has sucked the life out of me. I'm sat here wishing someone had decapitated me instead of letting me press play. When Highlander II was assigned to me as part of Project: RPO I'd forgotten all about the film and after watching it again I see why... It's highly forgettable.

All that you could forgive in the first film, Lambert's delivery, Connery phoning in for a pay check, the awful cinematography, are all still apparent but are now just really annoying. As is the story. Set in the future (although only 8 years from now) and against the back drop of a depleted ozone layer (for you younger folk this was a big deal back in the day I even had to change my deodorant for a while. Shocking!) it could have been a nice mix of fantasy and real world politics but unfortunately it was neither. It is actually sad to see Lambert performing so badly. It's sad to think that making films of this poor quality was deemed okay and is definitely where Hollywood's current plight began.

This was me being as positive as I could be and not swearing.