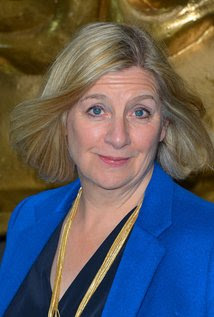 There are men who claim that “women aren’t funny.” Frankly these men are idiots. I always knew they were idiots because not only did that mean that they must have missed every screwball comedy and everything featuring Lucille Ball but because I’d seen Victoria Wood on TV.

I was once a comedy obsessive. I listened to comedy albums. I discovered the Goons and Monty Python. I watched stand-up on TV via O.T.T and Saturday Live. Then there was The Comic Strip Presents…and on and on.

She also, with Julie Walters, formed one of Britain’s great comedy double acts without ever really being thought of as a double-act. Perhaps it is because Walters is considered a ‘proper’ actor and Woods was ‘just’ the comedian. That was wrong. Both of them were great comic performers and Woods showed in Housewife, 49 that she too could act. But we knew that anyway. She’s pitch perfect in Dinnerladies.

She could write, sing, play and act.

I fell in love with her when I watched ‘An Audience with…Victoria Wood’ in 1988. I can’t remember if that’s the first time I heard ‘Let’s Do It’. In my memory it was. I bought the collection of her scripts, ‘Mens Sana in Thingummy Doodah’, which I read and re-read (along with all the Monty Python, Fry & Laurie and Goon Show Scripts books that I could get my hands on.) There was a point where I wanted to write comedy and Victoria Wood was one of the people I wanted to copy. I don’t know where the book is now. I think it disappeared along with my dreams of writing comedy. I wish I had it now.

Wood could do sketches, sit-coms, films and theatre. There’s perhaps been a tendency to under-estimate what she did until now. And it is always too late. There’s a generation of comedians – Catherine Tate is but one that springs to mind – who were massively influenced by Victoria Wood.

I suspect, like the Beatles, everyone has a favourite Victoria Wood ‘phase’. Mine was where I came in, Victoria Wood As Seen On TV but everything she did appealed. Oddly, for someone who was once so obsessed with comedy, I’ve never been a huge fan of sit-coms. No idea why but I prefer my comedy in sketch or stand-up form but I enjoyed Dinnerladies because, however odd the situation, it sounded like normal people talking.

So I just wanted to take this opportunity to say how much I loved Victoria Wood. I wish, when I saw her and her then husband Geoffrey Durham briefly in Lancaster once, that I said something but then what would I have said? She’ll be missed and we’ll always wonder what she might still have given us.

But in her own words, often quoted today, “Life’s not fair is it? Some of us drink champagne in the fast lane, and some of us eat our sandwiches by the loose chippings on A597.”