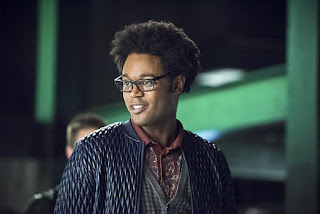 "That is an army of robotic bees. Yeah. That's my life now."

Brie Larvan, the Bug-Eyed Bandit, is sitting in Iron Heights prison hacking the parole board computer system and sorting herself out with a release date. TeamArrow are practising their fighting skills with Oliver kicking everyone’s arse and getting quite intense when Thea gets a text from Alex saying he has a job interview with the only Mayoral candidate left, Mrs Darhk. Laurel mentions that Felicity is in the market for a PR Consultant at PalmerTech and Thea says she will go and see if Alex can have the job to keep a good man away from the evil Mrs Darhk. Felicity and Curtis are talking about how they can make the spinal implant chip cheaper, whilst the board want a meeting to see how many zeroes they can add to the market figure, when Donna arrives at the same time as Thea who wants to discuss Alex. Malcolm Merlyn goes to the prison to tell Damien Darhk that HIVE are no longer his and really don’t want him out of jail so they will be continuing without him and no rescue is imminent. Laurel tries to get Oliver to talk about his feelings for Felicity.

At the PalmerTech board meeting, one of the directors collapses and bees start to escape from his body and in walks Brie who wants the blueprints for Felicity’s chip. She now controls the electronic systems in PalmerTech and appears on Felicity’s screen to tell her they must talk. She then surrounds the PalmerTech building with thousands of bees. Curtis, who had been sent home sick, sees the siege on the TV and rushes out of his apartment to try and help. He arrives at Oliver’s old campaign headquarters and discovers the ArrowCave and the identity of Green Arrow, Black Canary and Quentin Lance but doesn’t recognise John Diggle/Spartan. Once he has fainted and been revived, Curtis starts to use Felicity’s old work station to hack the robot bees, trying to find a way for TeamArrow to get into the building. He gets a bee that has been chasing Felicity, her mum and Thea to tell Felicity where to meet the team. At the meeting point though all the bees swarm into a giant bee man and sting Green Arrow leaving a bee inside of him that lays larvae.

Brie gives Felicity five more minutes to give up the blue prints before she starts to kill board members but Felicity comes up with an idea to save the board by taking them to an old lair with a secret passage to get out of the building that she calls a panic room so as not to wind up her mother any more than she already is. Curtis needs to remove the bees from Oliver and uses Laurel’s Canary Call to get the bees on one wavelength before he can destroy them, which saves Oliver’s life. Felicity, Donna and Thea get the secret elevator to stop at Board Room level and use Thea’s explosives to remove the wall allowing the board members to join Donna in the lift and escape whilst Felicity and Thea face off with Brie. Struggling to stand, Brie explains she has tumours on her spinal cord and needs the chip but can’t afford it before launching into a political speech about the death of bees and how essential they are. Felicity tells her where to find the blue prints. Damien Darhk meanwhile gets attacked in prison.

Curtis develops a computer virus that he puts in an arrow which Green Arrow can use to defeat the bees and save Felicity and Thea from Brie, who has just discovered that Felicity was the hacker that teamed up with The Flash to put her in prison in the first place. She summons her Bug-Eyed Bandit to fight for her when the Green Arrow comes crashing in. The bee in the ArrowCave meanwhile has escaped and is chasing down Curtis before Quentin manages to squish it. The virus Green Arrow fires doesn’t work and the Bug-Eyed Bandit overpowers him so Felicity smashes a lamp and uses it to electrocute him killing all the bees, Curtis has hacked all the remaining bees to sting Brie who falls into a coma. Curtis then makes up a story about trying to help the police for his boyfriend, Felicity wants to use PalmerTech as the beacon of hope for people and Malcolm Merlyn is talking to someone about helping Damien Darhk escape prison… Andy Diggle!

I don’t watch as much of The Flash as maybe I should do so I wasn’t familiar with the character of Brie Lavan but there was enough in the dialogue to get anyone pretty quickly caught up with events. The story was a familiar one, bad guy wants to take something, good guys eventually win and the emotional fallout stuff from Felicity and Oliver’s break up again held no interest for me. However the episode wasn’t a complete waste as Curtis, once he discovers the ArrowCave, was an absolute joy to watch. He was talented, hard working, a bit goofy, got shouted at for high fives and joke telling and was generally a more comedic version of what Felicity used to be. I really hope now he knows everyone’s identities and the whereabouts of the ArrowCave he is used more often. So this ends up an often dull episode that will please Olicity fans but bore the rest of us. Watch it for the Curtis value and the awesome twist at the end.